YO, BSCOTCHES! A while back we announced that we would be creating an indie game developer mentorship program here in St. Louis called the 8-Bit Dev Pipe. The goal of the program is to help local developers find the feedback and motivation they need in order to make something amazing happen. Namely, make some games.

Well, we just finished meeting with our first batch of mentees, AND WE ARE PUMPED. Over the next 8 weeks, we'll be working with these fellows to help them make their dream projects see the light of day. Feel free to follow these games if you find them interesting; the more feedback and followers they get, the better the end products will be!

NOTE! The titles of these games aren't final, and since these teams are JUST getting started, much of the info here will be in flux as well. These are the initial ideas.

Stephen and Wes have never worked together on a game project, but the two have both been in games for a long time. Stephen has operated primarily in the design sphere and a bit on the art side, while Wes is a hardcore programmer and loving family man.

The two of them were munching on buffalo wings one night and got to talking, and they both realized that they have had a HARDCORE CRAVING to make something awesome, but neither of them had a partner to create it with. So they joined forces and headed our way, and here we are.

[EARLY DESIGN] They'll be creating a "punchvania" game -- that is, a platformer influenced by the Metroidvania genre, where the primary, if not exclusive, form of interacting with LITERALLY ANYTHING is to punch it with Earth-shattering force. This includes jumping, which is accomplished by punching the ground so hard that the shockwave will send you flying into the air.

The game is LIKELY intended for PC, and Wes and Stephen's goal by the end of the eight weeks is to have a "vertical slice" of the game -- a polished, finished section of levels to show off the gameplay and core mechanics.

If you want to keep up with Punchvania, check out these FAT LINKS!

Phil Hayes is a renaissance man -- he can do art, programming, design, WHATEVER! So he just decided to go for it and came to us for a solo project. His concept was a bit nebulous at first, so we had to take some time to help him flesh it out a bit. The idea behind the game as it currently stands is:

There is a Dark Force siphoning the energy from the stars in the galaxy, leaving them as cold husks and snuffing out the lives of the planets that orbit them. You take on the role of a benevolent spirit that can travel from planet to planet, absorbing traits from any planet you touch. You can then use those traits to help defend that planet's star from the minions of the Dark Force.

For example, you may swoop down to a planet that is besieged by intense electrical storms, and you can consume its storms to unleash electrical fury upon your enemies. Or a planet may be burning up with heat, so you can absorb its heat to gain fiery attacks. The list goes on!

The concept is still in the planning stages, so we don't have any links to share as of yet, but we'll have more in the next Dev Pipe update.

We are EXTREMELY PUMPED to see these guys taking the initiative to devote their evenings, weekends, and other forms of free time over the next eight weeks to making these games happen. The whole goal of the 8-bit dev pipe is to help St. Louis developers get the motivation and following they need to bring their dream games to light, so be sure to lend these guys a hand and stop by their posts/sites to drop some comments and cheer them on.

We'll be meeting with both groups in two weeks, so we'll have some SWEET UPDATES at that time. Until then, GO MAKE SOME GAMES! 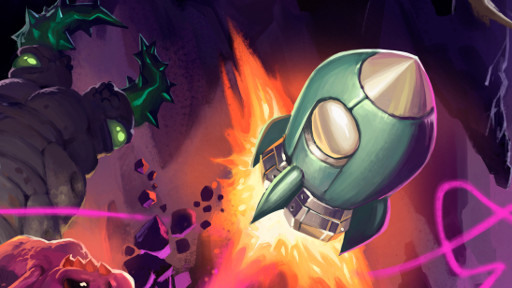 We've begun streaming for our third speedcrafting, where we make a game in just 10 hours.

by Bscotch
6.9 years ago

The Creatures of Crashlands

Today we're going to talk about the things that go bump in the night.

by Sam Coster
6.9 years ago