The Bscotch Ballyhoo #2 is here for you-hoo-hoo!

In this stretch of our deranged mini-magazine we’ll be giving you a look behind the scenes, divulge the dark design intentions behind our games, and share Ballyhoo exclusive secrets and content that those bootblonkers not in our mailing list could only dream about.

We want to share what we’re up to and make you slap your knees so hard that someone nearby thinks you’re practicing the spoons. So sit back, relax, and enjoy the din of the Bscotch Ballyhoo!

Crashlands is coming to SWITCH! 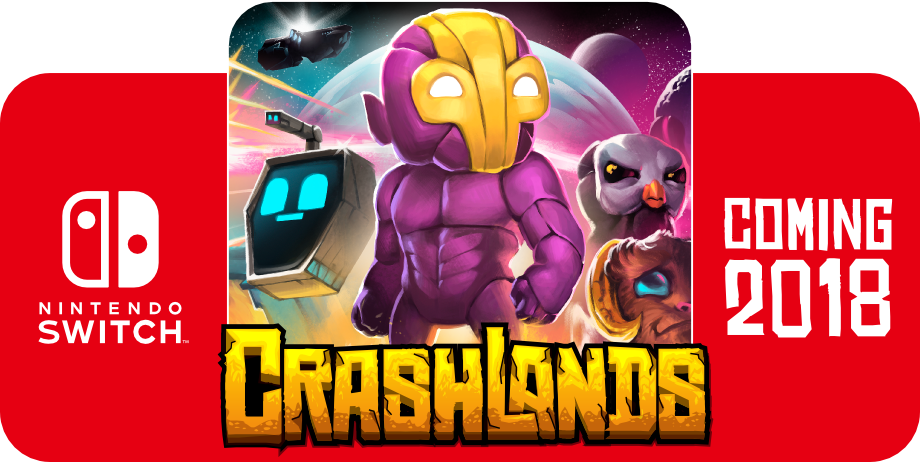 Ooooh that’s right. Thanks to our buddies at Nintendo you’ll soon be able to take Crashlands from the big-screen to the train to the bathroom, all on the same device! And best of all - your current saves from PC and Mobile will come along!

We’re working like frenzied beavers in floodwater to get this thing done, so hang tight for a release date announcement in the coming months.

FAIR WARNING: every time you ask “Is it done yet?” Shi, the Bscotch responsible for the port, spends 20 minutes staring into space contemplating the life choices that got him here. Be responsible with that power.

The Combover is... combing soon

Crashlands is pretty good, but you know what’s better? A hairstyle you can sport that adds depth and dimension to your doo. Speaking of depth and dimension - the Crashlands Combover patch is set to triple the number of available weapons, add a combo system, new gameplay modes, and a whole bunch more.

See, we had this big bald spot in Crashlands’ game design. The combat fell flat over time and player choice started feeling a bit sparse. After a long look in the mirror we realized that we already had all the wispy design strands necessary to get maximum fun-coverage... we just needed to comb them into alignment. SO THAT’S WHAT WE’RE DOIN’!

The updated combat feels good, is more engaging, and makes your trinket and gadget choices really matter. But enough about fighting, let’s talk about dying!

Crashlands, Permadeath, and YOU!

After playing through the new Sandbox Mode discussed in the last issue of Ballyhoo, we decided to add permadeath and call it HARDCORE instead. WHY?! We wanted to better model the experience we had as children playing in sandboxes. Namely, that part where the spectre of death was an ever-present companion, whispering of danger behind a crumbling sandcastle and Tonka dumptruck, all the while reminding us of the fleeting and beautiful nature of human life. You know, that part!

If you want to get in on the Crashlands Combover patch before everyone else, sign up to be a member of the Bscotch Anti-Bug Squad, or ABS. Become part of the core that, once flexed, lets us do sick backflips and wash our clothes without a machine! Crashlands will be entering beta very soon, along with several other projects. 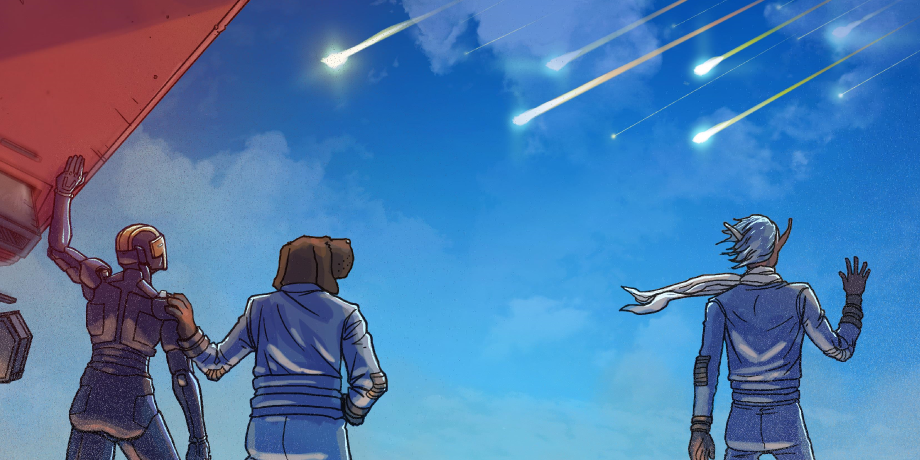 Join our flagship duo in Episode 2 as they attempt an epic heist and discover the unfortunate relationship between cash-piles and danger. You might cry-laugh during this one, so bring your favorite handkerchief and snuggle up with your security blanket before grabbing the pdf.

Hurry up and download this episode free from itch.io while supplies last! Just kidding it'll never run out HOOHOO GOTCHA!

You Shenanites are a lovely bunch. In this issue of the Ballyhoo we’ve got two stories of generosity, a need for speed, and a celebration of all things Butterscotch. Bask in the warm glow of your fellow players. BASK IN IT, I SAY! FEEL THE WARMTH!

Bahm gives the gift of game-making

When Shenanite Bahm saw another user in the community lounge locked out of game making because of the cost, he decided to do something about it:

I bought the Game Maker Studio Humble Bundle ... but I had already purchased GMS. A key was just sitting there, unused in my Humble Bundle account, and I was never going to use it. I saw someone I could help out with it and took the opportunity.

Such grace! Such beauty! Such Shenanigans! Good on you, Bahm.

Parzival98 gives the gift of games

Parzival98 showed up in our community lounge like a video game Santa Claus this month. He gave away nearly 30 premium upgrades to our free games - Roid Rage, Flop Rocket, Quadropus Rampage, and Towelfight. Rumor has it there are still some left, if you say something sweet to him:

If you'd like one of these, all you need to do is send me a Butterscotch ID friend request (my ID is parzival98), wait for me to accept it, and then send me a message on BSID saying which game(s) you'd like to get Buttered Up! (Only on Android)

Our heart-cockles are SO WARMED RIGHT NOW. 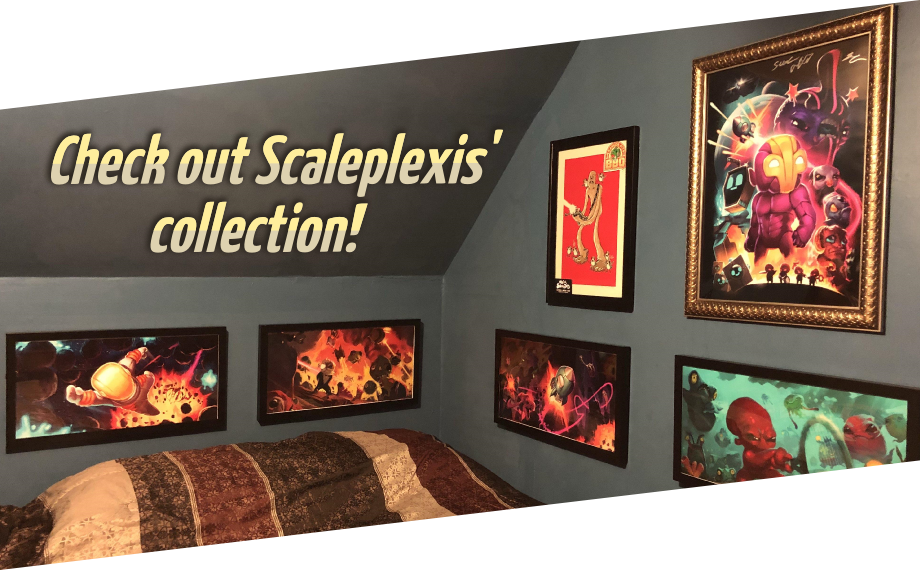 Shenanite Scaleplexis rocked our wheely chairs back a few feet when he posted this picture of his poster collection - featuring all the posters available in our shop, including a signed print of Crashlands! It’s this kind of love that makes the intense work of game dev worth it. Thank you, Scaleplexis, for being a fan!

You know what’s better than walking around Woanope? SPRINTING around Woanope! Mr. Foucs stacked four face-huggers on Flux, boosting her move speed by a bajillion percent. How?! Crashlands has a Deep Panic Simulator that realistically mimics the human response to nightmarish stimuli. After extensive real-world testing we found that panic caused by having multiple face-huggers latch onto you is additive, with no marginal drop-off. The more on your face, the faster you flail about! SUCH REALISM!

Do you want to get highlighted in the next issue of the Bscotch Ballyhoo for your gaming achievements? Hop into the community discord, a chat lounge for Shenanites, and share them. Adam, our tools-making co-founder, even whipped up a real-life Juicebox bot that hangs out in the lounge. When you arrive he’ll announce your name and maybe break-down and enter an infinite sass loop. CLASSIC JB! SO TRUE TO FORM!

Make a game, test your limits, live your life

“Events like this show you what your actual breaking point is in a safe way. After you know where you break, you can be a lot more comfortable getting close to that point in daily life or your job when necessary. That is a very important skill to have but is hard to learn in a safe way.” - 2017 Shenanijam participant

Each year we declare a weekend to make video games alongside our loving community during the Butterscotch Shenanijam. Jams are more about refining yourself than just making a game - so why not join us for a weekend of wicked creativity and see how far you can go? We’ll be there right alongside you!

Get the event on your calendar (June 8th) and sign up with the 120+ jammers already there on our itch.io page.

“Okay but WHAT IF you played as an elevator?!”

Speaking of game jams, have we mentioned we love them? They let us sharpen our skills, have fun, and prove that there’s no such thing as a good game idea. Most of our jam games die a horrible death in the purgatory of dropbox, but every so often one comes out worth playing. DO YOU EVEN LIFT?! is one such game.

It might also be the only game in the world that lets you play as an elevator. If that sounds like a horrible idea, it is! But the game that resulted from it is hilarious, fun, and one of our favorite jam games produced to date. It tasks you with controlling an elevator in a science lab during an outbreak of Goopoids - little green beasties with a taste for human flesh. Move the elevator up and down, open and close doors, drop-off mercenaries and get the scientists to the rooftop for extraction before they all get eaten.

Go get it for your windows machine over on itch.io and have some fun, fo’ free.

Levelhead is our upcoming precision platformer that lets you become a famous level designer, and huuuuueey is it coming along nicely. We’ve made huge developmental strides in the last 6 weeks, including a revamp of the in-game art, a sleek new UI, and the implementation of SCALE-POPPING!

A scale-pop is when you put similar blocks together in patterns and they suddenly ‘POP’ into a new form, like these spike balls here:

Seth added this on a whim and it’s turned out to be one of the most pleasant parts of level-building. Watching all your pieces organically combine and break-apart is hypnotizing! You can see even more of it in action in this video we posted to the Twits a few weeks back: 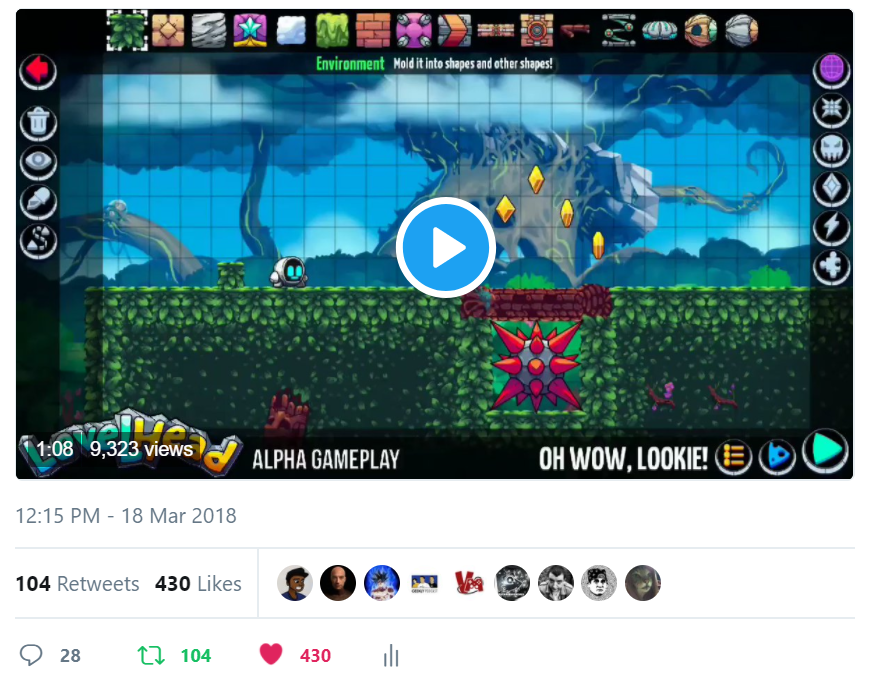 If “Variety is the spice of life”, then Power Ups are the spice of games. And hot dang did it just get REALLY SPICY over in Levelhead. 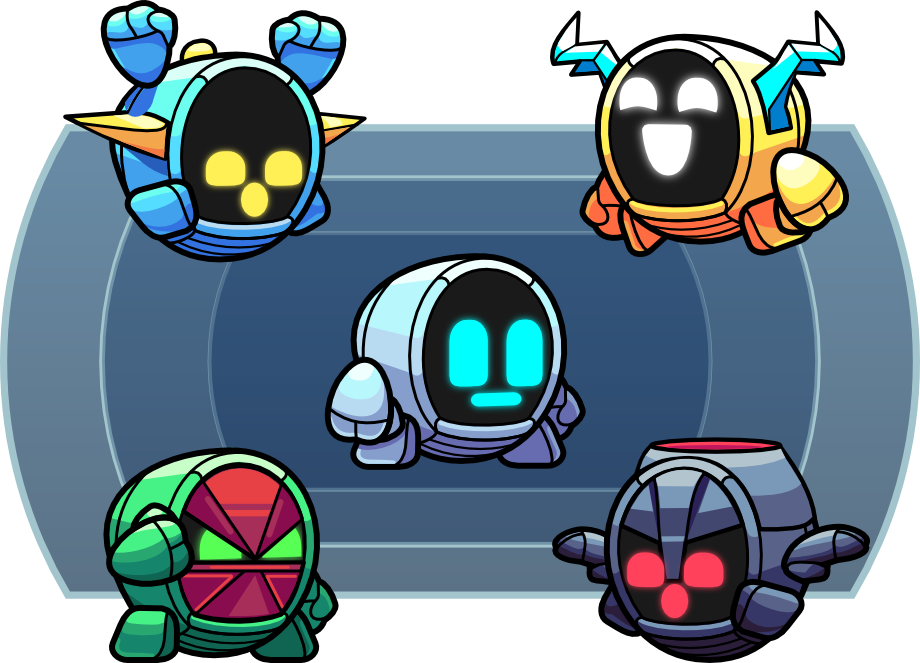 GR-18, our lovable bot and main platformer, has a number of game-changing powers you can deploy. From extra jumps to wall-climbing and ground-blasting, each form adds a unique dimension to gameplay that opens up exciting changes in the sort of levels you can build. Want a vertical level that players dig through by blasting blocks away? The Chassis-Blast (bottom-right) is for you! Want a jungly level that requires precision timing and leaps from wall to wall? The Mountaineer (bottom left) might be more your speed. Or do you want to force the player to fall toward a pit of spikes and save themselves by warping through the wall? Blink (top-right) is probably best for that!

If there’s a Power Up you’d love to see in the game, speak up in the community lounge or hit us on twitter @bscotchshenani!

Behind the Scenes with the Butterscotch Brothers

Sit at the table with the three of us co-founding brothers as we discuss the challenges we encountered while building Crashlands and divulge our future plans. These honest (and explicit) conversations about game dev and life will make you giggle and might even give you some food for thought.

20GR18 is shaping up to be one of our best years yet. And we’ve got a big thanks to send to YOU! Your joy and occasional chuckles are the fuel that keep our 4-person team moving. Thanks for being the wind beneath our wings, the stars in our eyes, and the cut in our jib, you beautiful beastie.

Have a mighty April, and we’ll see you for the next issue of the Ballyhoo!

Sent from my USB coffee mug,

The inaugural issue of the Bscotch Ballyhoo. Jokes! Secrets! Love!

by Sam Coster
3 years ago