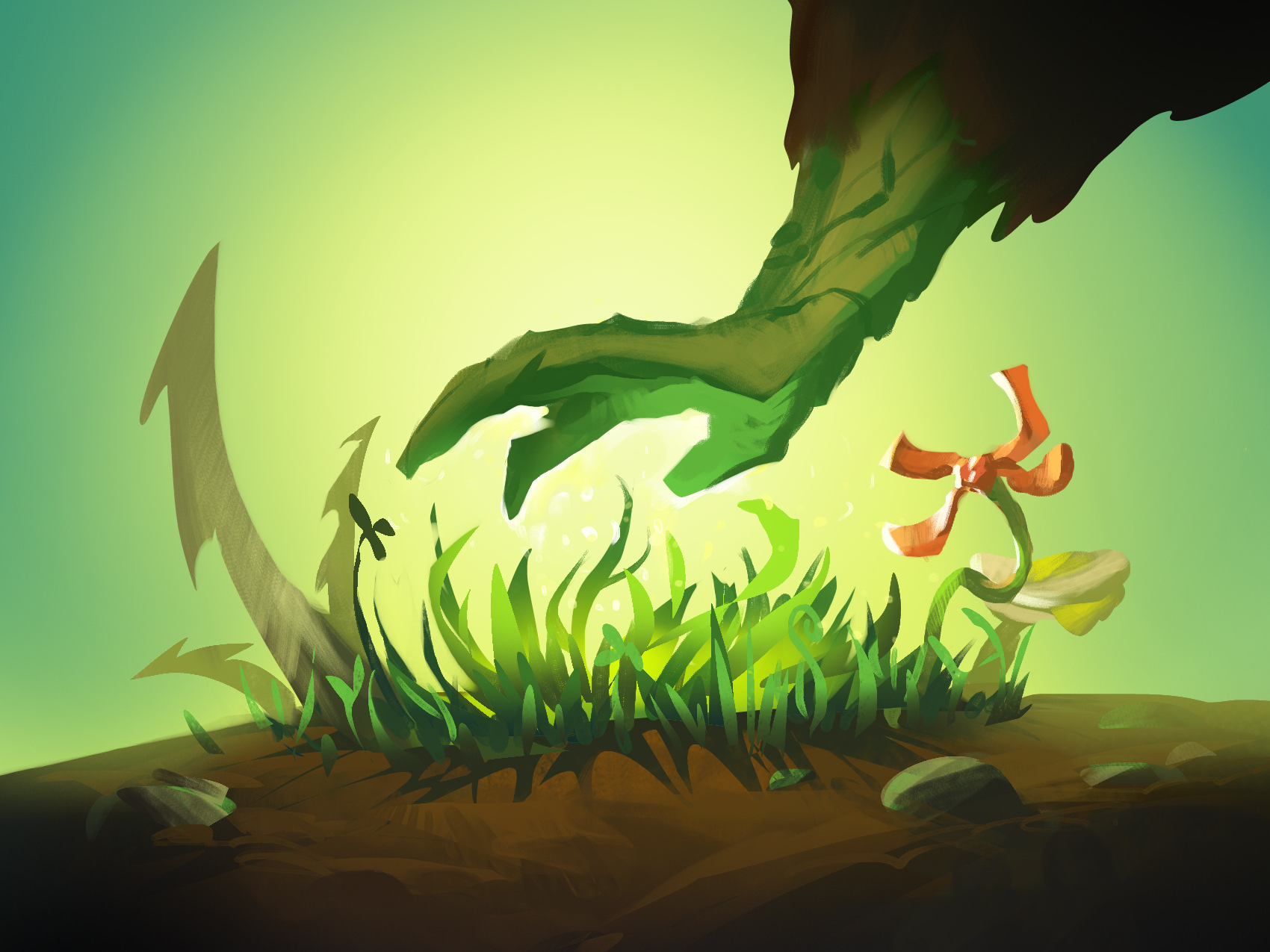 Check out the first episode here if you're new to this series in the Butterscotch universe!

“Well howsit gonna be bad? I want some big strong tree legs! Look at these little twigs!” The sprout wiggled his withered rootfoot in the open air. The storyteller grinned.

“Blessing or curse, all change comes with a price. Braama didn’t know how to walk on those limbs you’re wiggling about. She found herself stranded in the glade, flat on her belly, and whenever her hands touched the ground it was as if her energy was being sapped from within and converted into the rampant growth of the Savanna.

“Where previously she would flit from flatstone to logtree, she now had no means of reliable movement. Her legs had erupted from her body as if they’d been hiding inside all along, like roots curled up, waiting for the right season."

The Kistoon leapt up quickly, sending the sprouts scattering around the glowroot. His strong legs, good for jumping, propelled him into a quick backflip, while his ears trailed lazily behind. The sprouts gasped. He strode around the glowroot, stumbling every whichway, and sent the little sprouts into a fit of laughter.

“See, sprouts, Braama was still a day’s flight from the village elder. With no wings and new legs, though, that time was going to double, perhaps triple. She had to learn to use those legs, or face nighttime alone in the Savanna.”

“Not with them Glutterflies ‘n Wats! She needs light elsewise them creatures will eat her!” A sprout shouted, nudging the two sprouts next to him. All three sank lower to the ground with a look of fear on their faces.

“That’s right, little ones. And Braama knew this, keenly. So she picked up her mother’s root with her newly empowered hands and rolled onto her knees, ready to crawl.”

The storyteller kneeled down, enacting the scene. Clutching an invisible root in his good paw, with the bandaged one across his chest, he began to crawl.

He shook his body left and right, pushing with his legs to propel himself around the glowroot, mocking the lurching movement of Braama. The sprouts watched as he writhed in a quick circle before coming to a stop where he started, breathing heavily.

“If you aren’t built for crawling, sprouts, I do not recommend it. The night of Braama’s first day as a Seedsoul she made almost no progress back to the elder’s home. She made it only as far as the edge of the glade and began to weep. Her body was tired, and she was desperately hungry. As her sobs echoed across the Savanna, glowing, green light began to filter through the grass around her.”

“OH NO! GLUTTERFLIES!” a sprout shouted through her covered mouth.

“The Glutterflies emerged from their daytime slumber to feed! They knew nothing of Maarla, nor did they care for Braama’s plight. She had entered their territory and was echoing a call across it, which caused them to go on the offensive. Intruder that she was, she had to be destroyed.”

The sprouts huddled together now, assembling into a defensive pack against this invisible enemy.

“Braama’s cries caused her body to shudder and her vision to cloud. She didn’t see the glow of the Glutterflies until they were nearly upon her. Three of them - a simple worker, a queen, and an ancient - surrounded her.”

“An ancient?! Thems super rare and dangerous! My grandpappy found a sick one ‘n nursed it back to health. Thought he could tame it. When it was done fully healed it ‘sploded him! I swear it -”

The Kistoon glared at the vocal sprout until his story ceased. There was room for only one tale here. He cleared his throat.

“The beating wings and small buzzing of the Glutterflies shocked Braama from her self-pity, and she sat upright as though struck by a bolt of lightning.”

He sprung his torso upward, assuming a sitting position. His body listed to the side as he caught himself on one arm, then straightened upward again. Braama would’ve been new to the power of her body, and the storyteller made that crystal clear to the sprouts.

“In that moment, the ancient Glutterfly fired out a huge poison sac, aimed right for where Braama was sitting.”

The sprouts squirmed in anticipation. “BUT SHE CAN’T WALK! HOW SHE GONNA GET OUT THE WAY?!” 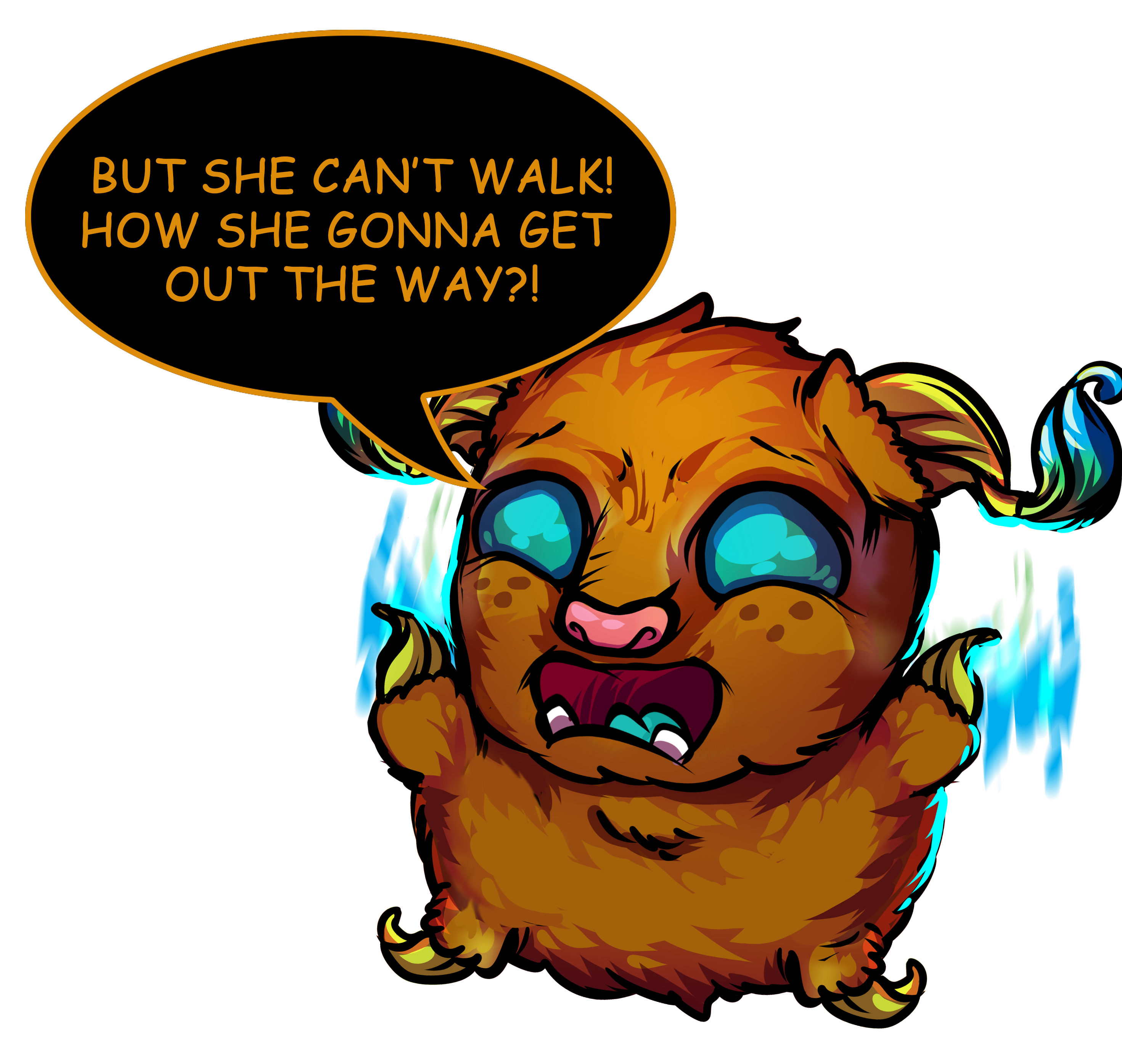 He smiled and made a motion in the air with his good hand. A sweeping half-circle and some woven lines - the sign of the Duskwatchers.

“When things happen too fast, sprouts, sometimes - only sometimes - Time will take notice and slow things down for us. And Time slowed now for Braama. She saw the projectile flying toward her. She thought back on her encounter with Maarla. She saw, in her memory, her home burning, and her wings falling to the ground. She looked down and saw the root of her mother lying in her hands. And she noticed, for the first time, how powerful those hands were. They were coated in a thick, metallic green bark that coursed with energy. She followed the points of her fingers to her legs and saw the same bark stretching out from her fuzzy thighs, forming powerfully curved legs. Legs that were unsure, but hers. She heard the voice of Maarla then, speaking from within the Savanna, as time began to speed up.”

The Kistoon cocked his head and his voice took on a deep, angelic tone:

“Growth can be dangerous, Braama.” said the voice.

The Kistoon leaned forward suddenly and thrust both arms into the grass, kicking up a small amount of dirt.

“Time snapped back to Braama as she plunged her hands deep into the Savanna grass. The build-up of energy in her chest, the gift of growth from Maarla, released itself in a mighty burst. Plants as thick as Braama’s new legs stretched up as the energy coursed out. The roots, made of the same metallic green bark as her limbs, spun tight around her, forming a dome of protection. The projectile slammed against Braama’s dome and exploded! PSHHHHFIZZZZZZZZ it went, melting a chunk of the plants away but leaving her unharmed!

"Understanding echoed through her as she rose a fist and saw three roots the size of her body rise in unison over the attacking Glutterflies. The roots hovered there, briefly, as the insects looked at them in bewildered surprise. Then...”

The Kistoon raised his bandaged arm over his good hand and brought it down, flattening the hand with a splat.

“CRUNCHHHHH! The growth ceased. Braama could hear the sizzle of the Glutterfly’s poison, once kept tightly inside their bodies, searing the roots that crushed them.”

The sprouts whooped as if the victory was their own. Some did little flying twirls and slapped their fists together, mimicking the Kistoon’s actions.

“Braama fell back to the glade, sheltered by the dome around her, and fell into a deep, exhausted sleep.”

The Kistoon fell backward and began to snore with all the grace of a Glaser. The sprouts drifted closer, rabbling to themselves and waiting for the next part of the story. The Kistoon continued to snore as if he himself were exhausted from the telling. The sprouts started to murmur, getting disgruntled by the wait.

The storyteller popped open one eye to see their anxious faces.

“And then she dreamed.” 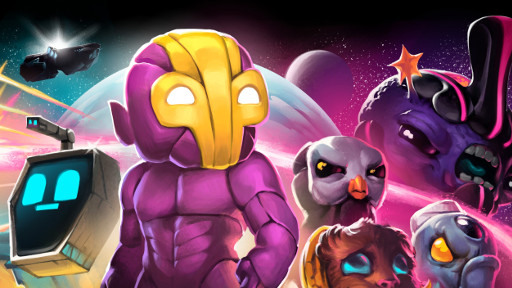 Crashlands has a pipin' hot patch of tasty sauce coming down the internet tubes.

by Bscotch
5.1 years ago

It's time for our new, weekly update on what's going on in the studio!

by Sam Coster
5.1 years ago