WELL GANG, IT'S THAT TIME AGAIN. Time for your weekly digest of butterscotch news, delivered in tri-weekly intervals.

It has been a turbocharged three weeks of breakneck development for Crashlands. We've been cranking out content so fast, in fact, that Sam almost choked on his own face today. All of the core progression content is now complete. Weapons, armor, creatures, resources, stations, floors, walls, doors, etc. from the crash of the ship to the end of the third biome are implemented. There are over 1,000 THINGS in the game, and nearly 350 recipes.

WHAT DOES THIS ALL MEAN? It means we're wrapping up Phase 1 of development and are prepping to start an internal alpha playthrough, which should take about 30 hours of play time. Then we'll move into phase 2: STORY IMPLEMENTATION! If you're wondering what this means for the launch date of Crashlands... WELL JUST HOLD ON TO YOUR BRITCHES. Like a big and buttery croissant, Crashlands will only be released upon the world when it is done baking.

In the meantime, feel free to salivate over the news we've got below. GET IT WHILE IT'S PIPIN'!

While our games may seem unrelated to each other, they all take place in the same universe and are, in fact, pieces of one giant story! Since our previous games are, well, somewhat light on story (something we're remedying in Crashlands) we wanted to find another way to tie our games together in our players' minds. This brings us to the Butterscotch ID (BSID) system.

The BSID is an experimental login system we're developing that will be (slowly) rolled out to most of our existing games prior to the launch of Crashlands. We want to use this to store player progression data in the cloud, allowing us to do one really cool thing SOON and other really cool things in the future.

The first cool thing we'll be doing with BSID is cross-game unlockable content. WHAT DOES THIS MEAN, you ask? Imagine that you defeat Pete in Quadropus Rampage and then boot up Towelfight 2 to find that a Pete 'jectile suddenly exists, and you can now fire Pete out of your face at Forn. Or you craft a new weapon in the upcoming Crashlands and find that it now randomly drops in Quadropus Rampage. PRETTY COOL, AMIRIGHT!? Yeah, I am.

You can go ahead and reserve your BSID, though it will not exist in any games for a few more weeks.

Make your character into... WHATEVER!

We all play sandbox-style games differently. Some people want to murder everything, some want to explore the far corners of the world, and yet others want to build the most gorgeous home they can create.

One way most games tend to handle this is through a "class sytem" -- a way for you to pick your playstyle at th start of the game. But because we're Butterscotch Shenanigans, we decided to do something COMPLETELY DIFFERENT. Rather than prescribing certain classes (wizard, warrior, etc), we wanted to take the more customizable approach and create a flexible class-building system through two item types - trinkets and gadgets. Let's take a look at these bad boys!

Trinkets are powerful, unique items, gotten through crafting, that add some passive bonus to your character. You can have 4 equipped at a time, and each does something a little bit different. When stacked together you can create builds that focus on damage, tankiness, gathering, or even movement speed.

For example, let's say I really like optimizing my time spent gathering materials. I can build and equip the Cleavebat, Efficiency Engine, Wealthy Statuette, and Clarm, giving me a chance for bonus resource drops, one-shot harvests, cleave harvests (hitting all nearby resources of the same type), and increased pickup range.

|IS THAT A BRAIN IN A JAR WHAT IS THIS, FRANKENLANDS?|

And if I just want to kill ALL OF THE THINGS, I can craft and equip the Shock Prod, Chem Wand, Shivly, and Clawbox, and then enjoy hefty chances to electrocute, burn, freeze, or bleed my enemies. YAY, DESTRUCTION!

Trinkets are powerful, and give you tons of flexibility on making your character really good at certain things. BUT... they're passive. We wanted an additional means to let people play their way, one that was more based on active usage of items. To that end we created Gadgets - powerful tools with cooldowns that let you do really, really ridiculous things, mostly combat related. You can have up to 4 equipped in your hotbar, if you're feeling especially violent.

Want some EXAMPLES? FINE! There's D-Bot, your helpful buddy robot who provides an invinci-bubble for you to thrive in. Then there's Thundercall, a portable storm maker that calls lightning down all around you. If you want to be more pet focused, there's even the Clothes Laser, which creates a beam of death between you and your pet that you can drag through enemies. Because WHY NOT?

The trinkets and gadgets have been a real game changer; the combat has gone from "run up to stuff and hit it" to... Well, pretty much anything you want.

Creatures in the previous versions of Crashlands were a little too inattentive. If you killed their best friend next to them, they wouldn't bat an eye. WELL, NOT ANYMORE!

We've added a bunch of triggerable aggression states to creatures to make them more lively, including when you gather resources that they would call food. All of this has resulted in the world feeling substantially more dangerous and alive.

There's a great deal more that happened in the past 3 weeks, but we don't have time to talk about it, as we've got approximately 20-30 hours of Crashlands to play through. Stay tuned here and in the forums for updates on the alpha! 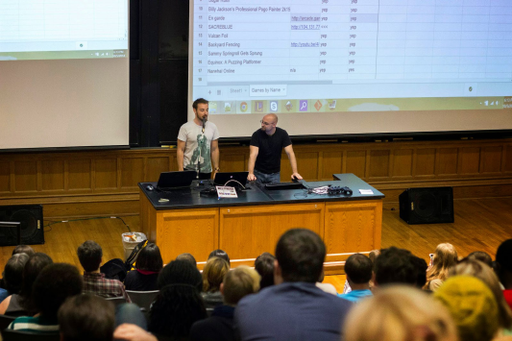 We made a Massively Single-Player Online Roguelike RPG this weekend!

by Bscotch
6.8 years ago

Things have been pretty nuts over here on the Buttery side of life...

by Bscotch
6.9 years ago