[UPDATE: Some time after writing this post, we revisited the problem of monetizing Crashlands and decided to go with the old-school pay-up-front model instead. Why? Well, in-app purchases ruin game balance and immersion, and our goal is first and foremost to make an awesome game. This means there will be NO FREE VERSION. If you want to play it, you'll have to buy it!]

HELLO, BSCOTCHES! Welcome to the  FINAL INSTALLMENT of the Crashlands Dev Blog. Today we're going to talk about that dirty word no one wants to talk about. You know the one... the "M" word.

Crashlands will be free-to-play [UPDATE: NOPE. This is a lie.]. Now, before you rip your teeth out one-by-one or start mailing maimed effigies to the BS HQ why don't you TAKE A SEAT AND BREATHE DEEPLY. It's time we had a talk.

Far from being profit-maximizing suitbags, we use a pantheon of Butterscotch Principles to guide how we build our monetization strategies. THEY ARE:

But this isn't the only set of boundaries we use. We have a few business goals that also help shape the strategy:

We've now cycled through a few different strategies and, WE THINK, have created one that manages all of these goals and principles seamlessly.

Crashlands, at its core, is a game about gathering stuff and building stuff. We will have at least a few hundred unique recipes for players to create by the time the game launches. Some of these recipes we consider to be progression recipes, while others are enrichment recipes. LET'S BREAK THAT DISTINCTION DOWN. 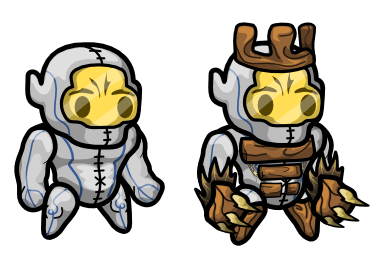 Progression recipes are, in a nutshell, the essential recipes you will need in order to progress to the end of the game. These include:

With the above items, you will be able to play through Crashlands from beginning to end and get a HINT of all that it has to offer. All players (paid and free) will have full access to all progression recipes.

But maybe you want to GORGE yourself on Crashlands. You don't want measly WOOD doors. You want CRYSTAL DOORS. And goggles that make you throw things further. And that legendary axe called THE BUTTERFLY that glows and sets enemies on fire. You don't just want the bare bones - you want a full 7 course meal of Butterscotchy goodness.

This is where Enrichment recipes come in. They aren't required to progress, but they deepen and expand the existing game systems to add utility, beauty, and outrageousness. If you get an enrichment recipe it doesn't quicken your journey to the end of the game (like that hare-brained Quadropus IAP); it adds extra paths to explore, and other modes to explore those paths.

A few items classified under "enrichment" are:

BUT SETH & SAM, you exclaim, HOW DO I GET MY HANDS ALL UP ON THAT THRO-PIPE?!

Paying for anything in the game will also turn off interstitial ads.

Aside from granting you a whole crapton of recipes at once, paying for stuff has another important upside. As a paying player, your transaction will be saved by Google or Apple, so you'll be able to restore the recipes you've unlocked if you, say, uninstall the game and reinstall it, or get a new phone. We won't be able to do that for recipes that you've unlocked by watching video ads, because as a tiny studio, we don't have the server infrastructure to store the save data of a bajillion players.

The Role of Ads

Let's take a quick detour and explain our rationale behind the whole, "video ad for a recipe" idea. We believe in the quality of our work. It's our opinion that, if someone is playing and enjoying something we've crafted, we should be compensated. WITH MONEY.

HOWEVER! We understand that 98% of people aren't willing  to (or simply can't) throw down a few of their own dollars to hold up their end of the deal. So, with our "watch an ad to unlock a recipe" setup, we're making it possible to use someone else's money to get ahold of everything Crashlands has to offer.

That someone-else being advertisers. If you don't or can't pay us to consume the work we've created, then advertisers will do it for you, and that's perfectly fine by us! We'll also be using interstitial ads to help support the game, but any purchase you make will turn them off forever.

It's our hope that by being transparent about our goals and principles regarding monetization that we can build a culture of respect between ourselves and our player base. Too often questions of a game's monetization scheme turn to accusations of "greediness" on the part of developers or "entitlement" on the part of free players. The question that should be asked is whether or not paying players are getting value for what they're paying for and whether or not free players are able to reasonably compensate developers for what they're receiving. We think that the system we've described above will fare well on both accounts.

We win. You win. EVERYONE WINS!

For the next while we'll be digging into content creation for the game to get it filled out by launch time. The next communication about Crashlands you can expect is the BETALPHA announcement, with all the details on how you can be one of the first to roam Crashlands and die to its aggressive fauna.

Although we're technically finished with our official DEV LOGS on Crashlands...

by Bscotch
7.3 years ago 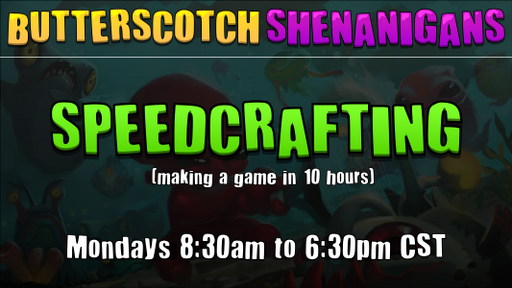 Our 2-man studio was started with a simple word at its core. Speed.

by Sam Coster
7.3 years ago