This post was written by Seth (the game programmer) and Adam (the web programmer).

HEY, HUMANS! We've been getting a lot of questions about the Crashlands Beta, and so we decided that it's time to give you all a general update about where Crashlands is and what comes next.

[**EDIT**: We're delayed from the goals set here. We have an up-to-date thread in our forums giving the status of development, so refer to that to see where we are!] 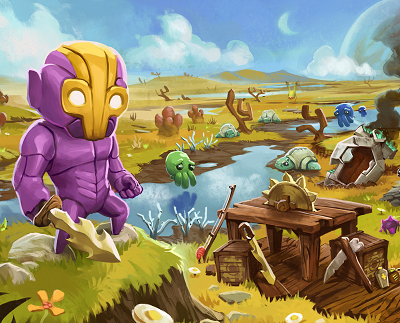 Our original target was to have the game ready for Beta when Sam went in for his one-month hospital stay for his next (and final) stem cell transplant. We set that target about 6 weeks ago, and Sam starts his hospital stay this very weekend. We had a MOUNTAIN of things to get done, and we did indeed finish most of those things. But not all of them.

That means we aren't starting the Beta yet, and Sam's cancer therapy is going to cast a lot of uncertainty onto the upcoming month. (Because there are only three of us, and Sam is responsible for all of the art.)

Despite all of that, we have a new target and want to let you know what we've been up to these past 6 weeks.

Seth does all of the programming and has had an ever-growing to-do list for Crashlands since development began two years ago. For the first time ever, just two weeks ago, that list started to actually shrink. There were a ton of small bugs, and a few major ones, that are nearly all fixed. Otherwise he's been adding layer after layer of polish to the game.

Game saving has been fully converted into a bandwidth-friendly binary format and so we are ready to get BscotchID hooked up to allow all that good cross-platformyness we've been talking about. There are a lot of complicated issues we have to plan for, and we'll need to do a bunch of testing, but even still we intend to finish that project next week.

Six weeks ago we hadn't even started putting the Crashlands story together. We did have an external outline, but story mechanics had not yet been built into the game and Adam was still building the Crashlands Creator, a web tool for building stories in the world of Crashlands. Three weeks later the Creator was done, Seth had hooked up most of the in-game mechanics for it, and Sam got to work building the story. A mere 2 weeks later Sam finished, in game, the first draft of the entire story. And just a few days ago he finalized the core story and most side quests for the Savanna, the first of the three biomes.

So what's left for the story? For the Savanna we just need a few more side quests to fill out the content, and need to animate two more bossfights. With all three of us working full time we would need a week to do that, and probably 2 weeks for each subsequent biome to finalize the core story, add side quests, add a handful of bosses, and complete internal testing. With Sam stuck in the hospital we aren't sure what is going to happen, but we will be working as hard as we can!

As already mentioned, Adam finished the Creator a few weeks ago. It will need some changes to allow for use by the public, but the Creator is not blocking completion of the game. Otherwise Adam has been building the Creations Browser, which is a website that players can use to find, mark for download, and comment on creations made by other players. The Browser is nearly complete, needing only a few more days of work (we'll put up a developer preview for it in the upcoming weeks).

To date, our games have always been English-only. We haven't had (and still don't have) the resources to localize our games, but now that BscotchID is a fully-fledged thing and Adam has learned enough webdev, we're going to take a first step towards non-English support. This is going to take two forms: (1) the Creator and Browser will have support for the most common languages so that players can make stuff in their native languages, and (2) Adam will build a web-based community translation tool (the Translation Engine) for the Crashlands Compendium and parts of the user interface. These will require some time and testing, but they do not block completion of the game.

Some of you are aware that we originally wanted to extend the Translation Engine for translating the official Crashlands narrative. Unfortunately we will not be able to do that, for a large number of practical reasons. We'll continue looking into localizing the official story, but for sure it will be English-only at launch.

All of the above stuff should sound like a lot of stuff, because it is. But we work fast!

Okay, so we just dumped a ton of info on you about where we are and what's left. But we know that all you really care about is what that means for the beta test and the launch date. As for the launch date, we're not even  going to hazard a guess. We don't think we're too significantly delayed from our by-early-fall goal, though anything can happen in the upcoming weeks. As for the beta, we're now close enough to make a plan. AND HERE IS THAT PLAN:

How the beta will work.

Testing will begin on Windows only, and once the incoming bug reports change from a fire hose to a trickle we'll start adding platforms. Testers will have free access to beta copies of the game, but only during the beta. The beta versions will require online verification and will become non-functional after the test is over. All progress will be deleted after the beta to prevent versioning issues and balance problems.

Once the Savanna is completely done and tested in-house, we'll start the beta. Our target date is in 2 weeks (August 28), but it could be earlier if things go well or later if Sam's hospital stay slows us down. So think of that date as more of a rough guesstimate. While testers are working through the Savanna, we'll be finishing up the next biome (the Bawg) with the goal of letting players into it 2 weeks later. We'll do that one more time with the final biome (the Tundra). We'll let in a new batch of testers at the start of each of those phases. After the beta is complete, we'll open up the Crashlands Creator and Browser for player use and testing.

Sometime next week, we'll start the selection process for beta testers (you can still apply at crashlands.net). We're working out the details, but what the application said is basically still correct. We'll likely send out a secondary application to potential testers to get more details about how much time they can commit along with detailed platform information.

In this age of the Youtuber, we know that many of our tester applicants will want to post early-look Let's Plays of Crashlands. We will not give permission for this, as the Beta is for testing only (not publicity). We'll give more details to selected testers.

Questions or comments? Head over to the fourms.

And we're skipping this week's podcast!

Sam recently gave a talk at the PKSTL 17 event.