For most of my life, I found it relatively easy to do things that needed doing. Even when I didn't want to do those things.

At least, I thought that I wasn't having trouble, because most people around me seemed to be having a lot more than I was. I was held up as a model of Puritanical work ethic through all jillion years of my schooling (K-PhD), so I was the shining example of not being "lazy", right?

The reality was that I had enough privilege and luck to be able to design my life such that my own particular brand of "laziness" had a minimum negative impact:

This list could keep going and going, but that's probably enough to make the point that "industriousness" -- and therefore its opposite, "laziness" -- are context-dependent properties that societally we treat as if they are context-independent.

I've been thinking about this a lot recently, mostly triggered by learning that I had ADHD while also realizing I had developed a mild depression over the past couple of years.

(Note that hyperfocus is only an upside in the right context. It is often a huge downside because other people misinterpret it.)

For the first time in my life, I was having trouble doing things that I wanted to do. This lead to the question... was I being lazy? I certainly thought that I was, which didn't help matters any since that added guilt on top of all the rest. It wasn't until realizing I was depressed that I stepped back to think about the context of laziness.

Fortunately, there are more knowledgeable people than me who have already been thinking about this for years and years. Go read "Laziness Does Not Exist" by Devon Price (which was recently turned into a book on the topic). I hadn't seen this until today, which reminded me that I wanted to do some writing on the topic.

Devon focuses that article on how mental health and privilege intersect with societal ideas of academic laziness. This is a super important aspect of the problem, which I defer to Devon and others and recommend that you go explore.

What I want to do here is take a step back to ask what we even mean when we think of ourselves or others as being "lazy".

My bet is that if you try to define it you'll end up with something like:

Laziness: Avoiding doing something you're supposed to be doing, due to a character flaw.

We could spend hours fine-tuning that definition, but I think you'll have a hard time finding one that others would find accurate that also means something substantively different.

We define laziness relative to "supposed to", and use it as a moralistic judgment about a person's fundamental being.

Who gets to decide?

I think that the message of "Laziness Doesn't Exist" is exactly right, which is that the moralistic idea of laziness is toxic, anti-human bullshit.

When the word "lazy" comes up, treat it as the discovery of a structural problem. By identifying someone (including yourself) as lazy, what you've actually done is uncovered a conflict between the context of reality and the context of your imagination. That means it's time to dig deep and find out what's really going on.

If you find yourself thinking that you are being lazy, or that someone else is, here are some questions to help you guide you to a more humanistic and empathic interpretation and hopefully reveal your next steps:

In college I spent most of my hours glued to science textbooks and doing related coursework and lab work. I never turned something in late, and usually had it done well in advance.

For my non-science courses, on the other hand... I put in the least effort possible and delayed all tasks until the last possible moment. I was, in a word, "lazy." But... why?

Importantly, the fact that laziness is the outcome of a structural problem doesn't necessarily let you off the hook for doing something. But taking out the bullshit moralistic component to get to the why allows uncovering the structural issues so that they can be addressed where possible. Where you can't address them directly, explicit awareness still lets you work on management strategies.

The next time you start getting down on yourself about being "lazy", remember that there's no such thing and then dig deep. If you feel comfortable sharing, I'd love to hear what you discover!

This weekend I continued to experiment with my new workspace setup: now I have a second monitor! 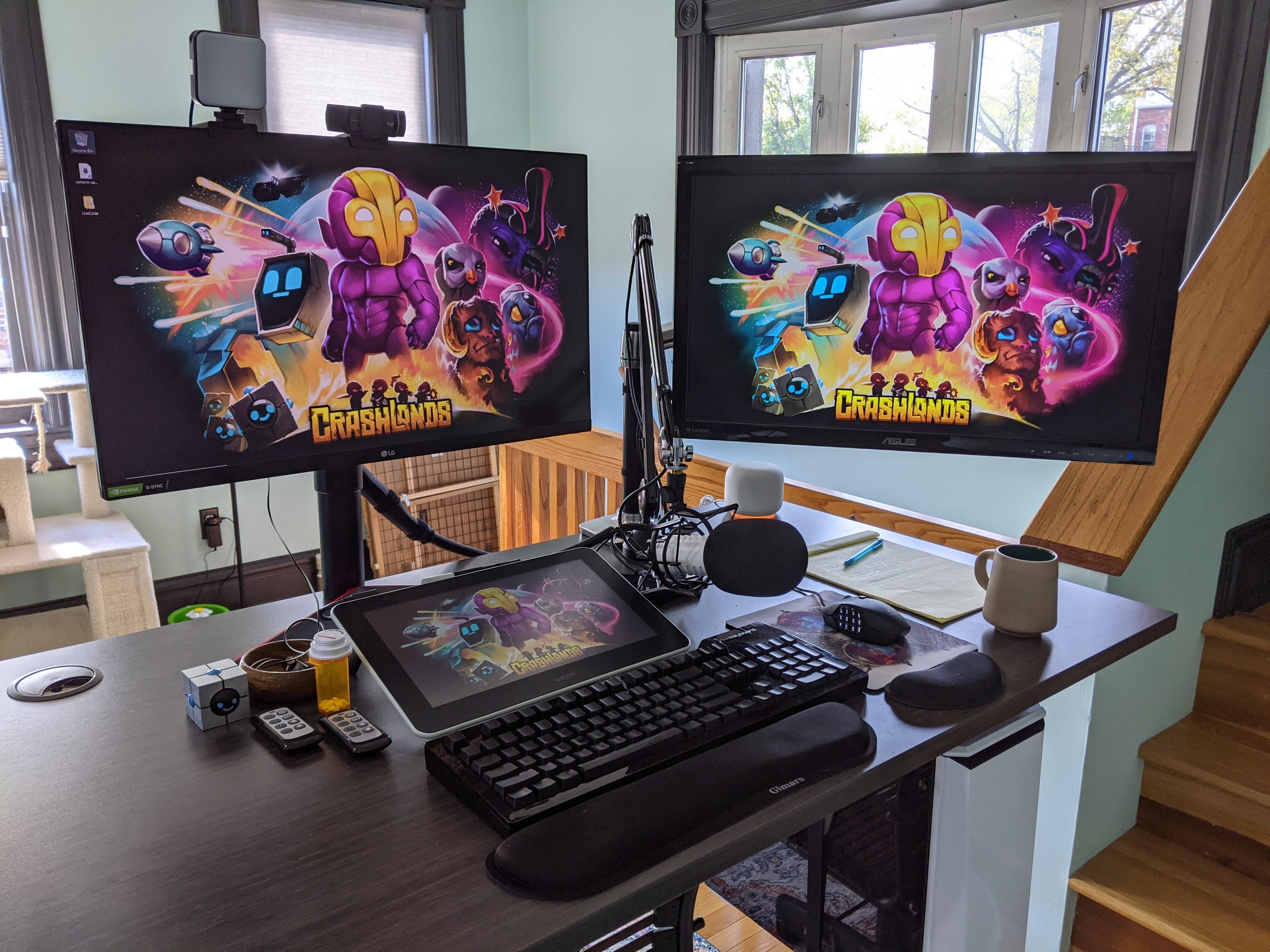 Well, technically I have three since I also have a Wacom tablet. It just somehow feels wrong to call that thing a monitor.

I'm a big fan of virtual desktops, and that's normally my preference over having multiple physical desktops. I figured the physical thing was still worth trying out. Here are some takeaways and tips!

Have any tips for multiple monitors and virtual desktops (on Windows 10 or any other OS)? Share them!

🎥 Seth is streaming gamedev this weekend!

A few weeks ago Seth declared on the podcast that he'd be streaming for Ludum Dare, which is this weekend. He can't back out now.

I don't know exactly when or how much, so keep an eye on our Twitch channel (twitch.tv/bscotch). Subscribing and making sure you get alerts is probably the best move.

I plan to continue streaming roughly once a week for the foreseeable future, so if you want more nerdy web stuff stop by! I had a blast last Tuesday with everyone who came.

Also, our videos don't stay on Twitch forever, and uploading them to YouTube is a lot of work... So assume that any streams will only be available for a few days if you don't catch them live!

✨ Your buddy Adam is FAMOUS

When it comes to niche nerd stuff on community-blogging platforms, anyway...

Two DevChats ago I talked about "Documentation as Code". It felt like it would work as a standalone article so I posted it on Dev.to. To my surprise, it caught some traction. It ended up being featured in their "Top 7 Posts" for that week and appeared in their newsletter.

I have a dozen other posts on there that haven't done nearly as well (several of which I think are far better and more interesting), and I didn't think anyone at all would care about Docs as Code.

I suppose that's yet another reminder that no one can predict success, and the best move is just to keep at it.

Do you have any similar stories of surprise successes? Share them!

by Sampada Coster
3.3 months ago

Ride of A Life!

by Sampada Coster
3.6 months ago