Time for an overhaul!

As we approach launch, we have to take a critical eye toward all the things that might scare off new players or keep them from getting involved in the community. We've started ripping up old systems that were getting in the way of that goal, and we started building new ones to make the new player experience smooth as butter. Let's take a look at just a few of the things that we've been working on this past week!

We are getting closer to begin some larger-scale testing of the mobile version of Levelhead. But before we do that, we have to make sure it's working PRECISELY AS INTENDED! So we're in the midst of beefing up some of the mobile controls, adding some extra layers of tutorial elements to teach players how to do advanced moves using the touchscreen, and getting the editor up to speed. The mobile version is feeling really good, though.... Once you get a hang of the touch controls, anyway!

Levelhead has a lot of inputs. A LOT. And these inputs are spread out over tons of interfaces. With the way our input system was set up in the past, things were just way too tangled, which kept us from allowing players to rebind their controller hotkeys. So this past week, we did a POWERFUL DETANGLING, and rebuilt the input system from the ground up.

Because of this, in the next patch, you'll be able to rebind controller inputs! Plus, this allowed us to add some more hotkeys where we previously couldn't -- like the path editor! Oh, and the whole system is now way more optimized. Wins all around!

We have a few items in the game that can only be distinguished by color, such as Hardlights and Keys. After seeing someone on a Twitch stream become unable to pass a section of a level because they couldn't see the color difference between various keys, we realized we needed to add something extra to help people out. 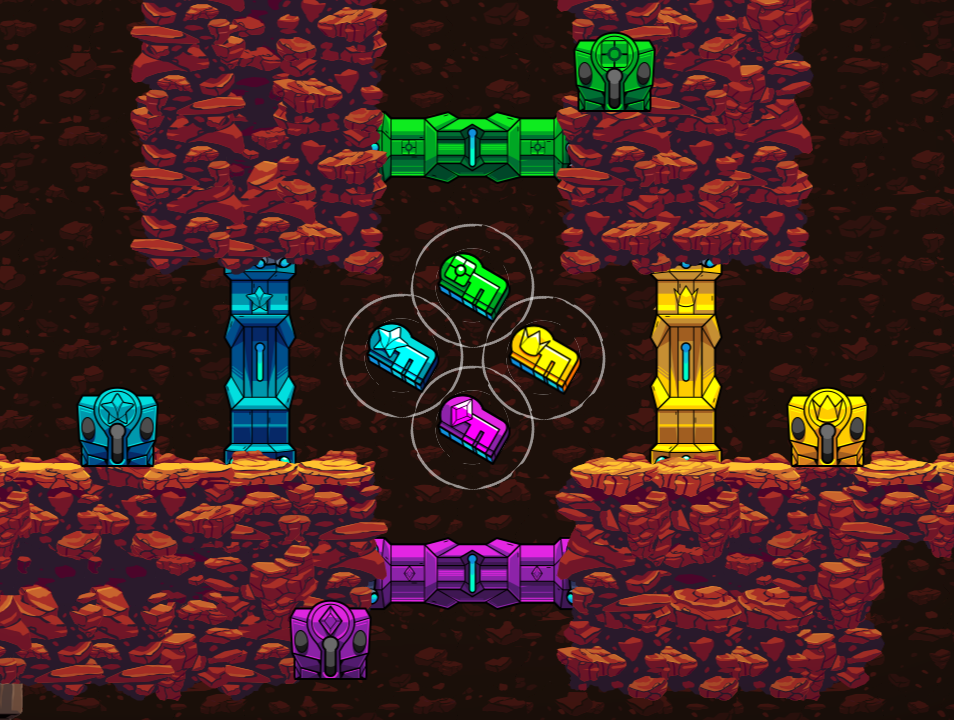 Keys now have icons associated with their colors, and key-related items use those same icons as well! Now, if there are places where you can't see the colors, you can use the icons instead. Hopefully that helps! Please give us feedback on how these work out for you, once we get them in the game!

One of the issues we're working on solving is the fact that we actually don't do a very good job of onboarding new players and getting them involved in what we believe to be the core of the game: building and sharing levels, and playing community levels. Because it's possible to play as a guest without logging in, and because we never actually point players toward the login process or explain the benefits, our login rate is a lot lower than it should be.

So we're updating the login flow as part of our New Player Experience Overhaul, and once it's finished, it should get a lot more players onboarded properly and brought into the community! This is a huge update, though, so it'll take some thorough work and testing to get finished. But it's coming!

We aren't sure if we'll have a patch out next week, but we'll continue blazing forward on all of these updates. And if we hit a spot where we're able to deploy them, then we'll get them into your hands next Wednesday! If we don't make it in time, we'll at least have a developer blog so you aren't left in the dark.

NOW EXCUSE ME I HAVE TO GET BACK TO PROGRAMMING!

This week GR-18 goes down memory lane, brings out its inner child and feels fireworks all around!

Spectacular fireworks, the feeling of being on cloud 9 and the GOAT FederGR-18.