Prepare your eyes and thumbs for a FEAST of a patch! We've got a little bit of everything this time around, from editor tweaks, to new discoverability features, and even a new biome!

The big news of this patch is that we have finally wrapped up production on the game's fourth biome: The ASTEROID TUNNELS! 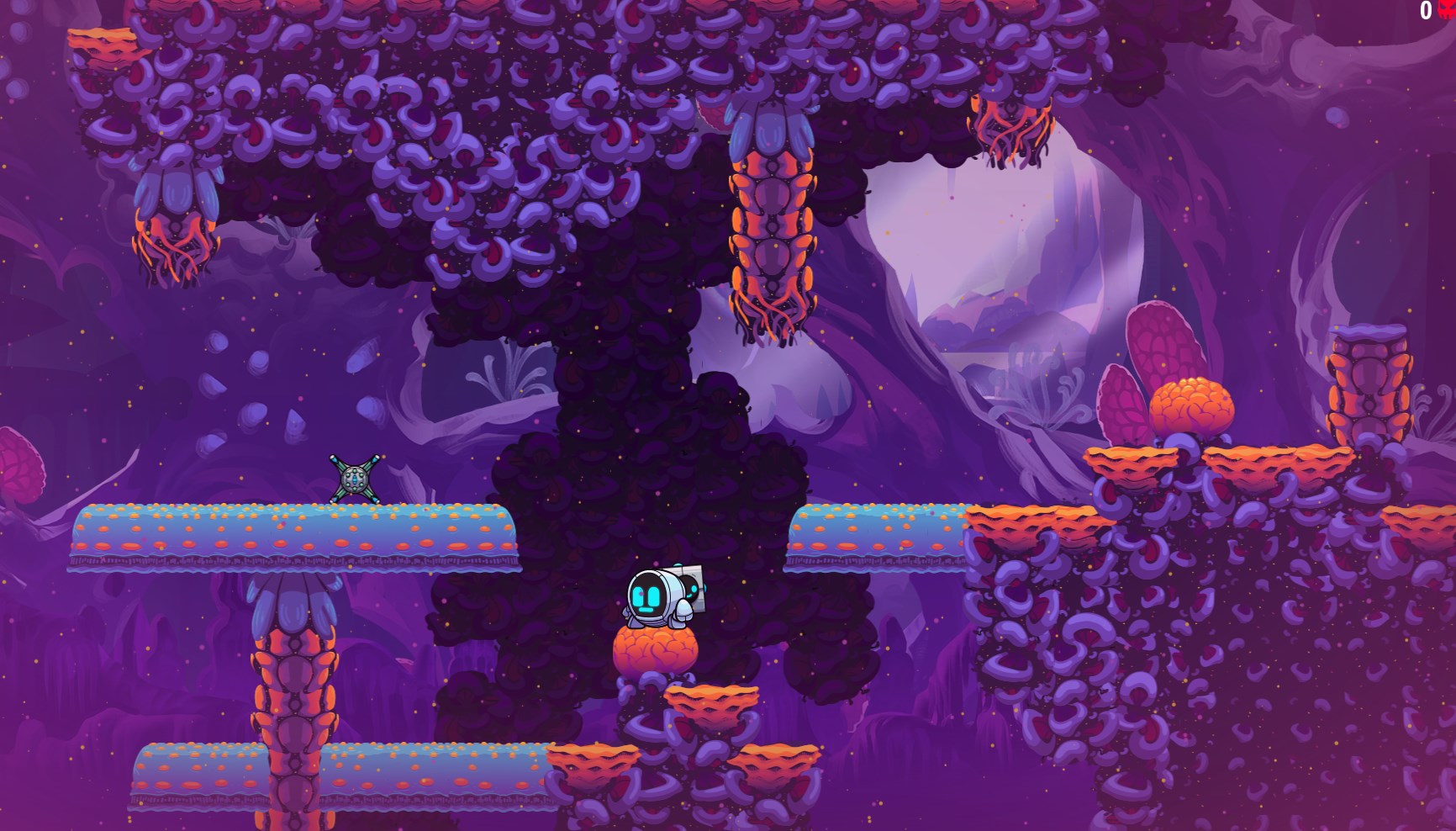 Biomes take a lot of heavy lifting to create because they have so many different parts, including the beautiful painted backdrops by Eric Hibbeler, the glorious soundtrack by Fat Bard, and Sam's detailed tile work. The Asteroid Tunnels have been in the works for about 8 weeks, and we couldn't be happier with how it all came together!

Bonus lore tidbit! The Asteroid Tunnels is a reference to our game Flop Rocket, where the Bureau of Science was attempting to start a new space program deep inside the tunnels of a drifting purple asteroid. It was fun to reimagine what the insides of this asteroid look like up close, with all of its weird alien biology and squishy bits. We hope you like it as much as we do!

People have been asking us for a long time for some way to play random levels. Well, we recently hit the point where we could fit that feature into a patch. So put your RANDOM pants on, because the day has finally arrived! 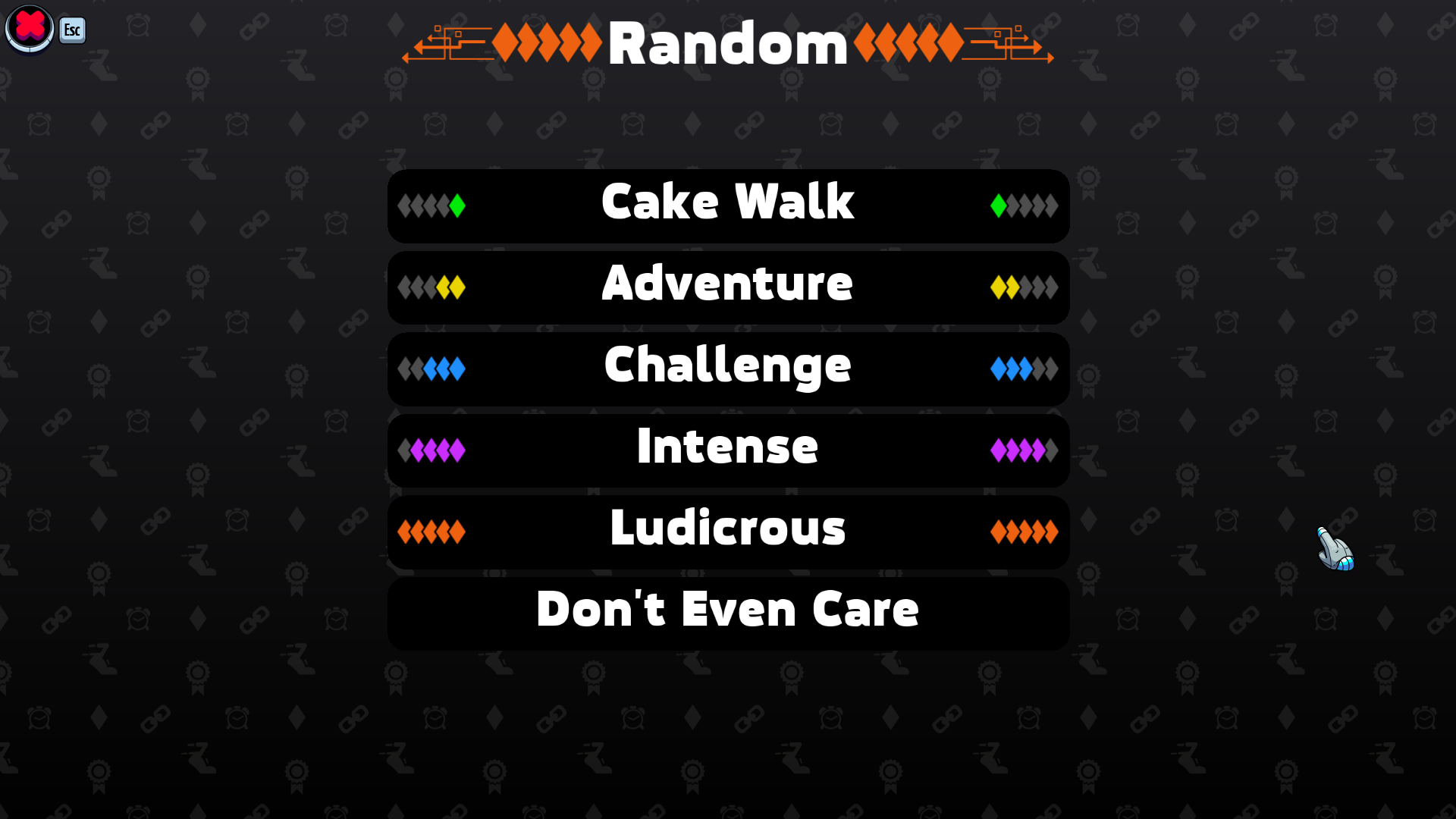 Now when you enter the tower, you can choose whether to play the Tower Trial, go to the Library (where you can browse levels), or just play random stuff, filtered by difficulty. You can also tell the game that you don't even care what difficulty of levels you get, if you're brave.

When you choose to play random levels, the game will spawn a playlist of 10 totally random levels for you to enjoy, based on your selection criteria.

Things have been getting a little BLOATED in the editor these days. We keep adding stuff to the game, and those items need a home. But we're reaching the point where we are just running out of room in the editor selection bar.

So we took a step back and WIGGLED some stuff around. Now, we have a whole new "Cosmetics" category, for stuff like camera and music controls! We've also got a GATES category, that's just for doors and stuff! And switches now just have their own entire section, since we've got... a trillion of those.

It'll take a little getting used to the new layout, but it makes a heck of a lot more sense once you get the hang of it!

We've all been there. You're placing a proximity switch of some kind, and all you really want to do is check whether the player is standing a little piece of terrain. But those dang proximity sensors are limited to detecting SQUARES, and so you end up with a detection range that is wildly out of control!

WELL, SAY NO MORE. We got you!

Now, you can flip proximity switches into "Rectangle Mode," and you can then customize every corner of the detection area. You can make a super long, skinny detection area that's just on the floor. You can detect whether the player is exactly standing in a doorway. You can detect WHATEVER YOU WANT! It's your level!

Now that players can Like, Favorite, and Tip levels, and follow the creators of those levels, we wanted to bring the whole system together. When you're playing a level, we thought, you should be able to do all of these things at pretty much any time. So we updated the game's interfaces to weave these systems more deeply into the game's various UIs.

For example, now you can tip a level from anywhere just by expanding its level card! 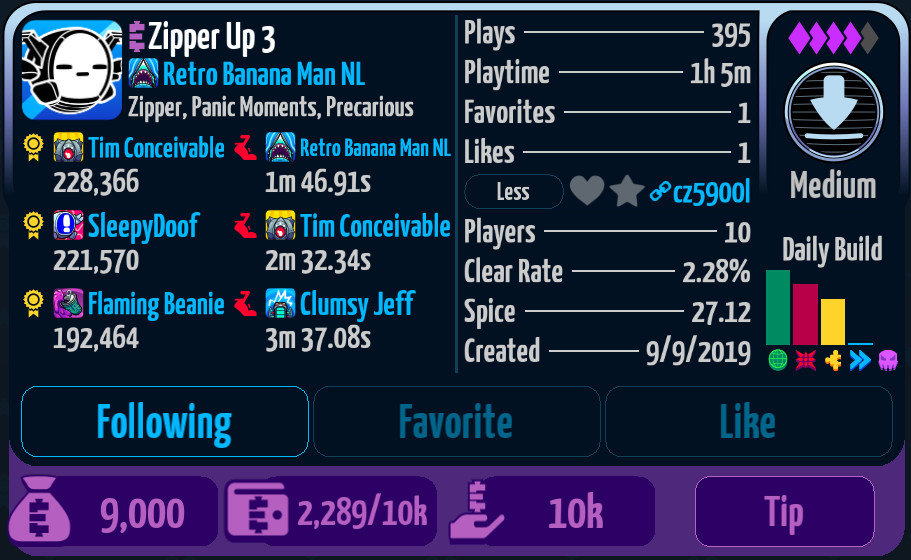 Oh,what's that? You're already playing the level and now you want to tip it? NO PROBLEM! You can also tip the level from inside the pause menu! Or even on the ending scoreboard!

We've also got the Like, Follow, and Favorite buttons on those interfaces now too, so you should never be in a scenario where you can't show a level creator your appreciation for their great work.

Those are the BIG ONES from this patch! Now get out there, and do good for our goods. IN THE ASTEROID TUNNELS!

If you want to see more, as always, feel free to dig through the patch notes below! We'll see you next time! 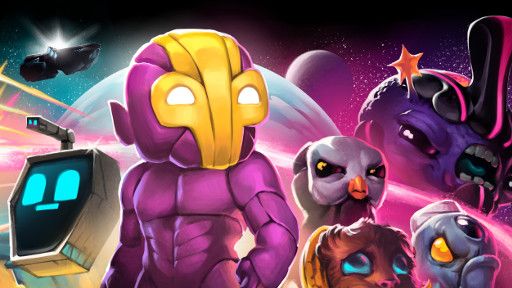 Crashlands mobile is coming to Playond!

Time for some new adventures!

by Seth Coster
1.9 years ago

Get ready to experiencing fun, uniqueness and creative in abundance!