Welcome to Patch 0.8, Levelheads! This time we've got a wild & weird hodgepodge of stuff, and there's certainly... a lot of it. With our Rickety Relay update, whether you're a contraption builder, a speed runner, a campaign cruiser, or a budding cinematographer, we've got something for you!

We love our context-aware terrain tile system, but we've always felt like it would be nice to be able to create more "Constructed" areas of levels -- parts of the level that feel like someone built them. Things like houses, shacks, sheds, towers, etc... And although we do have Kronkrete tiles for this, we wanted more variety. So we created a new tile set: RICKETY WOOD! 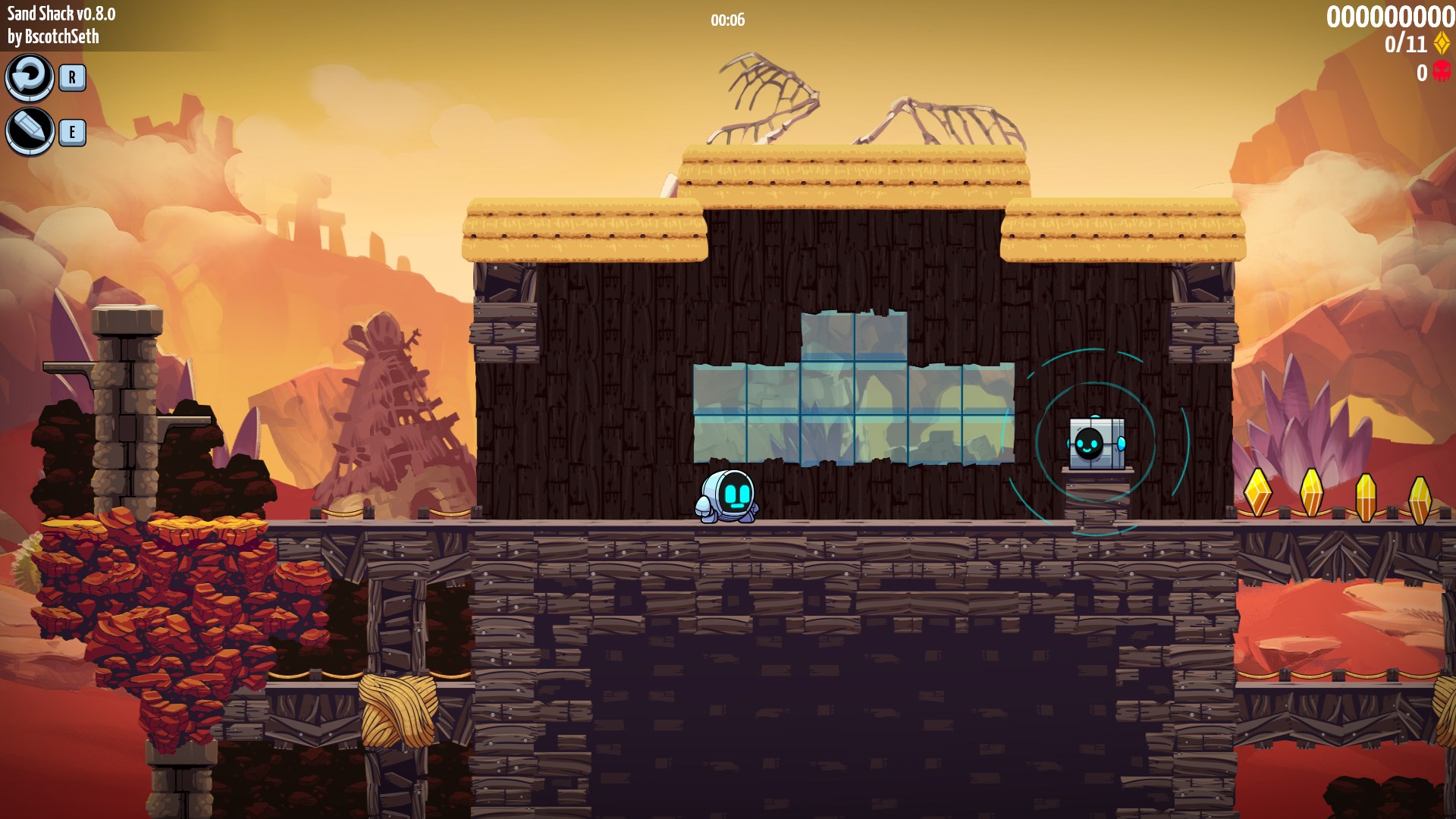 Rickety Wood also has the special power that its context-aware algorithm also looks for backdrops, so it will be able to discern whether it is indoors or outdoors. If it's a topper tile to an indoor space, it will even turn into a thatched roof! If it's an outdoor bridge, it will get ropes!

We also added Kronkrete backdrops, and a new "Window" tile that allows you to create indoor-feeling spaces that have visible backdrops, without necessarily just punching holes in the wall. Plus, this keeps the bugs out.

Create Cinematic Scenes with the ZOOM-R!

Once we started building cool houses out of wood, we realized it would be way cooler if we could show more of our creations. So we added a new item: the ZOOM-R! With the ZOOM-r, all you have to do is hook it up to a switch anywhere in your level, set the zoom level, and flip that switch during gameplay.

Now, you can create a tense, up-close moment, or zoom out to showcase some interesting structure you've built and create a sense of awe. It's these little cinematic touches that truly separate the good level builders from the great. We're pumped to see how you all end up using it!

Build a Working Computer with Relays!

Although our players have made flamethrowers, replicas of other games, and working calculators in Levelhead, we couldn't help but wonder... What if we made Levelhead's switch system even more powerful? SO WE DID, by introducing a new item: the Relay! Here's how it works.

Levelhead's Switch system involves "Sending" and "Receiving" channels. For example, a pressure plate might send a signal to Channel 1. Meanwhile, a door somewhere in the level is listening to Channel 1. So you push the pressure plate, and boom! The door opens.

The limitation of this system is that you can't have cross-talk between channels. That Channel 1 pressure plate can only ever influence items that listen to Channel 1. Well, with relays, we've fixed that problem!

Relays are, on the face of it, quite simple. They listen for a signal from one channel, and when they receive the signal, they send a signal to another channel. You can think of it as sort of "transferring" a signal across channels, like having your pressure plate on Channel 1 open a door on Channel 2.

That's the simple setup. But it turns out, Relays can be used for a whole lot more. Our beta testers have already figured out how to use Relays to create every kind of logic gate that exists. So we expect to see a full, working computer at some point in the near future, built out of these things.

Oh, and because we knew this was going to blow the lid off the switch system, we increased the maximum switch ID from 127 to 999. Hopefully that tides you maniac builders over for at least another two weeks! After that, we'll have to figure out how to get that fourth digit in there... and fifth...

Skip Across the World!

OKAY, TIME TO GET DEEP INTO SOME MECHANICAL DISCUSSION!

One of the tricky things about physics-based gameplay is that sometimes, emergent mechanics appear that you don't plan for. In Levelhead, up until now, we've had the following mechanics in place:

These three systems combined to allow for advanced, but somewhat unreliable techniques:

Although these techniques were hard to execute and pretty interesting (and fun to watch), they made it very difficult for level designers in Levelhead to make levels that could "contain" the player. Since advanced players could simply clear any gap or any height at will, the design side of Levelhead started to break down, and level builders had to keep trying to come up with ways to "de-cheese" their level to prevent these moves from being used.

So, after some long chats with our community and some soul searching, we have decided to tweak the game's physics in one small way, which would still allow the Super Jump, but disallow the Infinity Leap and the Infinite Super Jump. This means you can still clear a high gap once, but you can no longer ascend forever.

All we had to do was to modify how GR-18 gets pushed upward when kicking down. So now, it looks like this:

This solves the inifinite leaping problem, while also introducing some new tricks due to this little "double jump." For example, here's a new, weird way of skipping across solid spikes using a pickupable item:

We'll keep an eye on this change and make adjustments as needed!

As a final thought on this change... This is part of what makes Early Access really interesting. Levelhead isn't set in stone, and we (and our community) are always striving to come up with ways to make the game better. It was truly a pleasure having our wonderful players approach us to talk about this mechanics change with a... LEVEL HEAD. We appreciate the willingness of our community to wave goodbye to a mechanic for the long-term health of the game, even though it was pretty overpowered (and therefore... pretty fun).

For our final big highlight, we've got a bunch of nice visual improvements to the campaign in this patch, including curved paths! 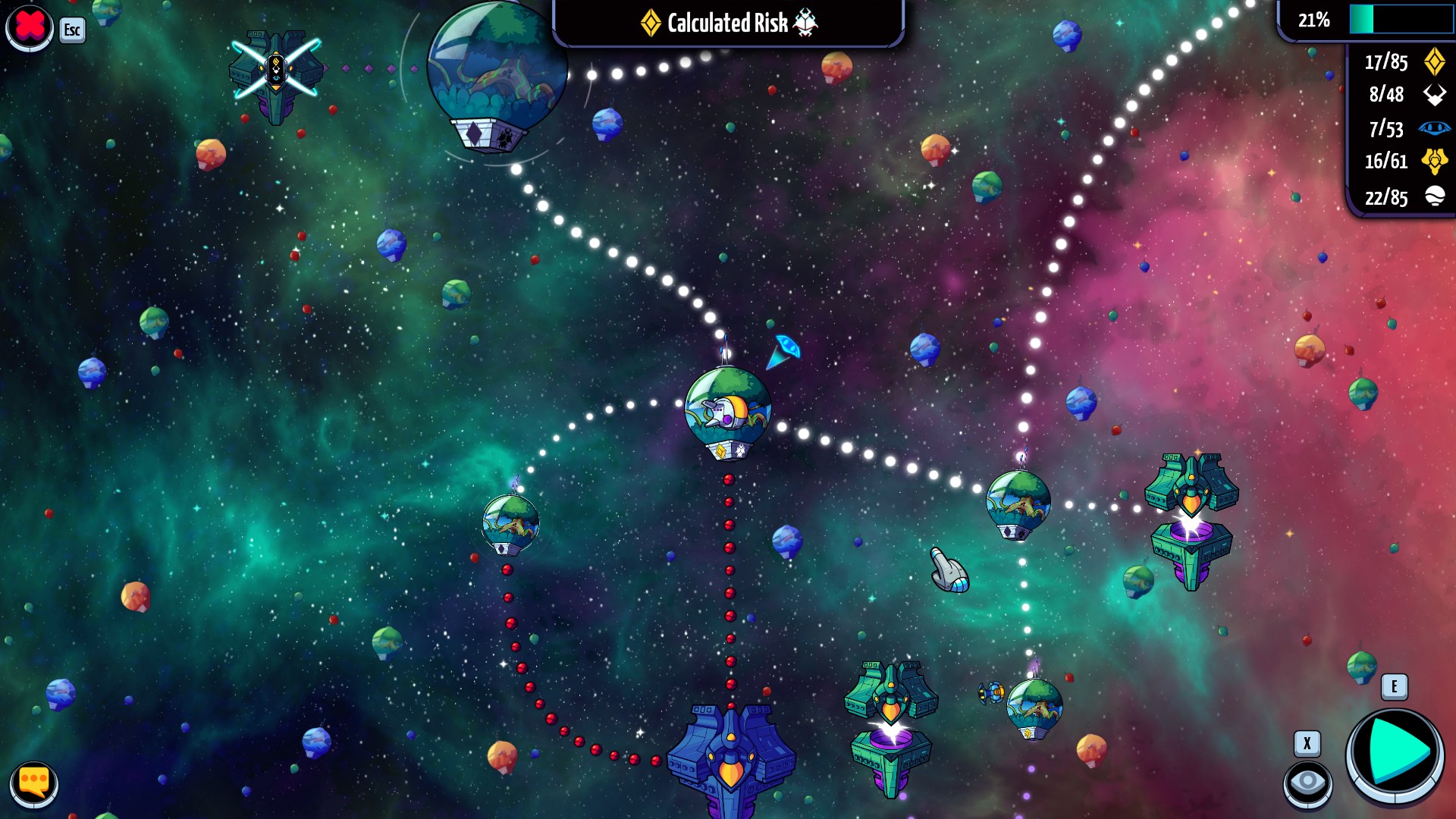 Yep, that's right... We got rid of all those rough corners! Now you can smoothly glide that space ship all up and down those Bezier curves! Oooooh!

Plus, with the new Rickety Wood tileset and ZOOM-R in our back pocket, we refactored a whole bunch of the campaign levels to give them a much more rustic and cinematic feel. If you haven't been back to the campaign for a while, now is a good time to go scope it out!

And some other stuff, too!

This patch is LOADED with fixes, improvements, and features, so here are just a few more quick highlights before we get on to the RAW, UNFILTERED PATCH NOTES!

All right, get outta here, and we'll see you in two weeks for patch 0.9! Though if you're still hungry for bullet points, carrry on! We've got tons of 'em!