WE HAVE A CONFESSION. At one point, not very long ago, Crashlands was suffering from an existential crisis. There was plenty to do, lots of things to build, and a fistful of enemies to punch in the mouth, and yet one looming question began to take over all the other points of design:

WHAT IS THE POINT OF THIS GAME!?

Our previous title, Quadropus Rampage, had a similar moment a week before launch when one of our reviewers said that the game was extremely fun but felt pointless. In response we took three days and whipped up Pete, the mad boss god and nemesis of Tack, and developed a series of boss fights from the beginning of the game to a theoretical "end" which we arbitrarily placed 100 levels into the dungeon. Fans and reviewers alike loved it (though they hated Pete, because he's a toolbag) and it made the game objectively better. It gave players a mountain on the horizon to work toward, and eventually blow to smithereens. | YOU SMARMY FISHGODBLOBTHANG YOU COMPLETE ME |

We've since dubbed this "THE PETE EFFECT." A game can be mighty fun in its own right, with super tight systems and juicy interactions, but if there isn't a greater goal, most people will break off and leave it before the going really gets good.

The Compendium is the base of the goal-and-narrative mountain of Crashlands, the foundation of the player's reason to be. It is a system through which players can make progress in any given play session, it is an in-game wiki for everything players interact with, and it is the home of Spazbox, your insane robotic companion.

The Survivor is part of a group of Interplanetary Scientist-Explorers from the Bureau of Science (BS for short) who are dispatched across the universe to learn about all the sweet stuff it holds. Each S.E. is given a Whizbot - a recording device, thinking machine, and companion all rolled into one. Whizbots use their artificial intelligence to help their S.E.'s gather all the information required by the BS, and to survive in the wilds of any planet by performing rapid analyses on wildlife and flora as well as devising schematics for tools and weaponry, should the need arise.

Unfortunately for you, upon crashing your escape pod into this new world your Whizbot glitched out. When it came to it referred to itself as SPaZB0X and, although it can't ignore its prime directives to aid you in any way necessary, it now does so with an extra serving of sass and a questionable level of enjoyment.

Spazbox also serves as the guide for the player, giving brief, expletive-laden tutorials whenever one of the many systems of Crashlands comes online for the first time. This allows us to not rip players out of their adventure with some heavy-handed learnin', and gives us a chance to inject some Butterscotchy humor at regular intervals.

| BUT WHAT DOES SAWGRASS EVOLVE INTO!? |

The Compendium acts as a massive knowledge store for the Survivor. It's function is similar to that of a Pokedex - its full completion is the underlying goal of the Survivor and of the Bureau of Science. When a player deconstructs an object for the first time, be it a Tartil or a Logtree, the entry on that item will be added to the compendium. Because as we all know too well, the only way to gain a higher understanding of something... is to destroy it.

BUT WAIT! There's more. The Compendium has three depths of knowledge to be gained for each entry, represented by the medals awarded by the Bureau of Science for their acquisition.

As players deconstruct more and more of any given object in the compendium, their knowledge about that item will increase, much like a traditional XP bar. Once the player hits a certain level of knowledge about, say, Sunshrooms, their Compendium will DING and they'll move up a medal level!

PSH WHO CARES ABOUT MEDALS I DON'T

Spazbox does, YOU BRUTE. But for those who require more tangible rewards than just a shiny piece of metal, you're in luck! The more knowledge you extract from any given object in the world, the more recipes Spazbox can come up with using that thing as an ingredient. In other words, With each medal comes more interesting and powerful recipes.

FOR EXAMPLE. When you first interact with Logtrees you can't do anything with them. After you've gotten your lumber-jack on and deconstructed five or so, Spazbox will come up with a smattering of uses for all those materials you've just gathered. Now you can build some sweet armor, a sawmill, and, hey, even a flimsy sword. TIME TO STAB EVERYTHING?! YES.

The sweet thing about the Compendium system is that it turns gathering into its own mini-game with its own set of goals and achievements, while also feeding into the larger purpose of the Survivor. Add into that the rarity of items in the Gold tiers, and players can even begin hoarding trophies in their houses to show off their sciencey accomplishments. Science trophies? YUP.

That's all for this episode of WHAT IS CRASHLANDS!?!?. Stay tuned next week for housing. 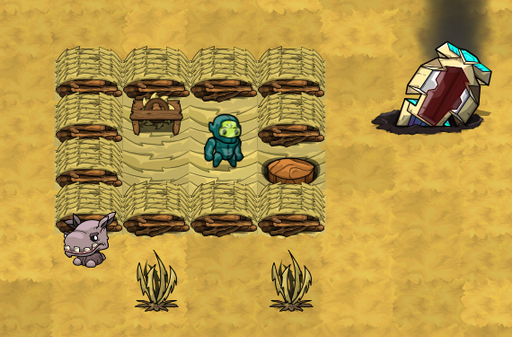 We're going to talk about something TOTALLY CRAZY.

It now falls on you, test pilot, to carry the weight of the space program on your shoulders...