[UPDATE: Crashlands has changed quite a bit since this post, and goes live on January 21, 2016!]

WELCOME, BSCOTCHES, to the first installment of our bi-weekly Crashlands update. In these posts, we'll reveal some info about what the game is all about. The topic for this week: THE WORLD.

We want Crashlands to be a place where people can lose themselves. To that end, we've built the world around a series of design goals that have served as touchstones as we've added more systems and content.

Infinity... on a Phone

The underlying girder of our entire system is the procedural generation of the world itself. We needed a way to generate a massive world and populate it with a diverse array of wildlife, plants, and environmental oddities. And we needed to do it while leaving the tiniest of memory footprints, such that it would actually run on most up-to-date smart phones.

Our first pass at the start of the project took around 4 minutes to generate a world which took about 7 minutes to walk across. We aren't ones to kid ourselves and knew that if we asked the Free-to-Play market to wait for 4 minutes while we made the world we were going to have a bad time. Seth set out to remedy the situation, and after some immense brain-against-code-slappings, we can now generate an infinite world in an instant. NEATO!

But what's more important is the way that world is structured. The game is a mishmash of sandbox and action-rpg. The RPG elements demand that there be some sort of progression to the game, meaning we need to structure the world around the Survivor's arrival to ensure a quality play experience.

Welcome to the Biomes

The Survivor's crash site is the very center of the world. Radiating out from the crash site the world begins to split itself into separate ring-shaped biomes, each containing its own range of flora and fauna to be mastered. As the player journeys further from their ship, harvesting and slaying all the way, the relative wildness of the world increases and the level of interaction deepens. 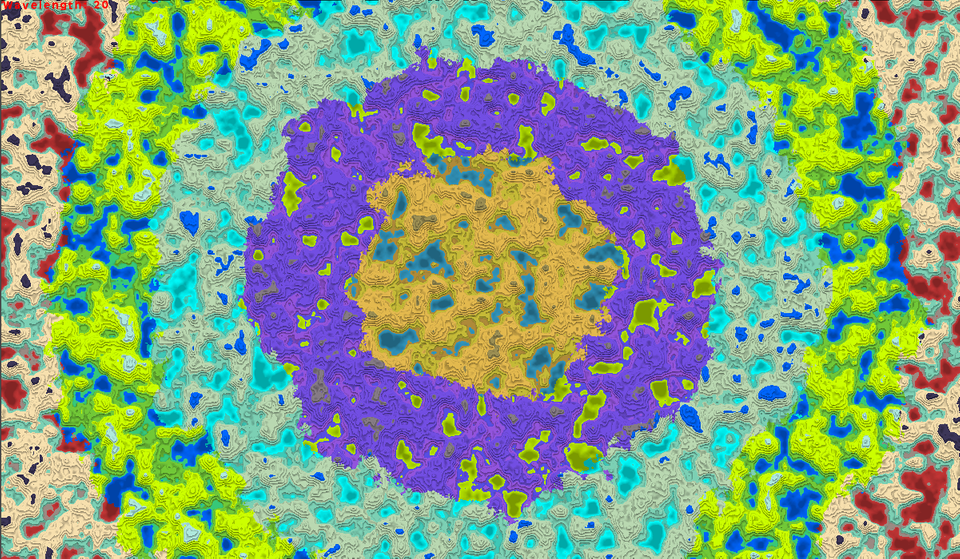 | This is the world from 1,000 miles up. Note that the colors aren't those that'll be found in game; this is a representation of how the biomes are structured. |

At present, we are about 60% of the way through the first biome, the Savannah. As development continues, each biome should take less time for us to create, so don't worry about that! We've yet to decide the number of biomes that need to be complete before launch, but it seems that building out through the jungle (biome 2 in actuality) would provide more than enough gameplay for even the hardcorest of our players, and would provide plenty of room for us to continue updating the game in the months after launch. But we'll play it by ear.

Exploration is my Drug

BUT WHAT USE IS AN INFINITE, EMPTY WORLD?

No use at all, we think.

Exploration in Crashlands should fuel the glorious dopamine release that made early humans venture forth from their caves and begin mastering their environment.

Crashlands features a bevy of creatures, all of which are tamable. Each biome has sub-biomes within it, like the Tar Pits of the Savannah, that have their own unique flora and rare creature types. There are plants that grow only in certain regions, and some that appear sporadically and produce a harvestable component every day of in-game time. So if you come back the next day, you can pick those sweet, sweet blossoms once more. 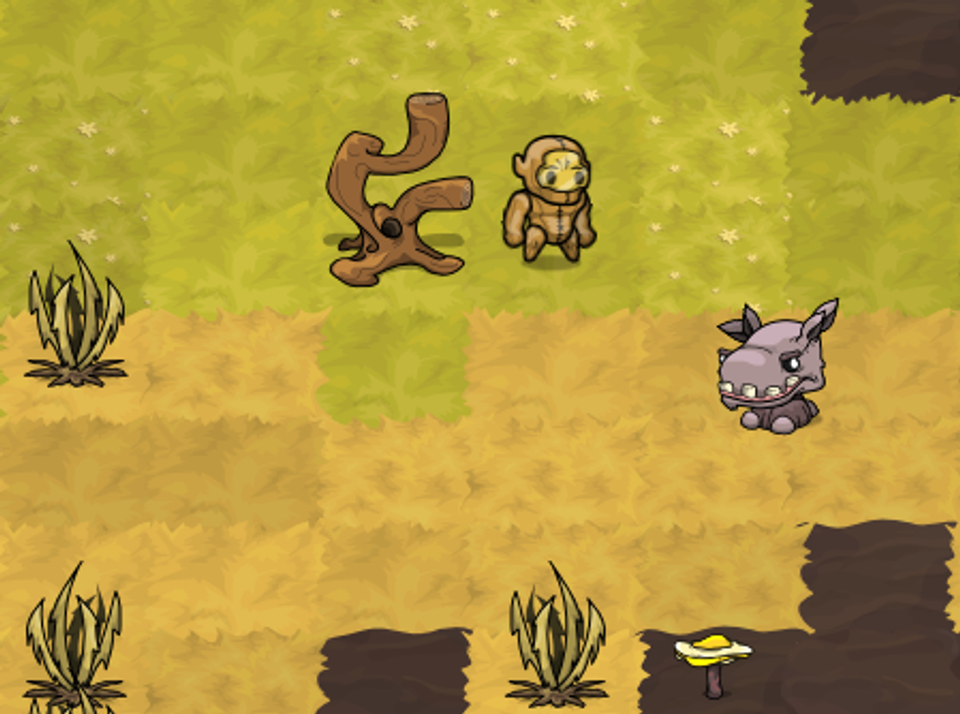 Further, creatures, plants, and other resources that are destroyed have their own drop systems, so each one has the potential to drop a handful of components and items, ranging from the mundane (seeds, for example) to the rare and extremely useful (precious gemstones).

Now, all of these interaction points would become moot if there wasn't someway to figure out where they were and map the zones the Survivor has already visited. Building a home would become equally moot if there were no way to find it amidst the expanse of the Biomes. Luckily, we've got a robust world mapping system that'll help you along as you explore.

| TELEPORTER NETWORKS! Beams are generated between connected nodes and the player, showing where you can jump |

The world of Crashlands can be made slightly smaller by clever use of teleporters and signage. The Survivor's ship serves as the first point in the teleporter network a player can create to fast-travel around the map. The Survivor is also equipped at the outset with a placeable teleporter called the Warp Beacon (seen above as the leftmost point. Teleporters within range (the blue rings) of one another allow for networked fast-travel, meaning the Survivor can jump from node to node in the network and quickly make their way across the ever expanding world.

Anyone who has played some of the larger open-world games (a la Skyrim) will understand that the markers placed on the map by the developers are infinitely useful in determining a next goal or remembering where something of interest was. But Crashlands isn't about us telling you where to go... It's about discovering things on your own. So rather than produce the points of interest for the player, we've decided to create a sign system that allows the placement of icons on the map itself, and the eventual ability to draw text directly to it. That way, you can label the various places you've discovered and put your mark on this unexplored wilderness.

Did you find that super rare Wompit, Albi? His albino-ness may murder you now but someday you'll be able to tame him. And on that day you'll want to know exactly where he is. SO SLAP A SIGN DOWN to mark him on your map, and you can come back later!

The basic interaction in Crashlands comes from touch. This game is a huge sandbox that is built for mobile, so rather than interacting via a system of dials and knobs, as most ported sandbox titles have done (TERRARIA WE'RE LOOKING AT YOU), we've built everything around the idea of a single tap.

| That was a NEARLY HORRIBLE DECISION |

Touching an interactable item will cause the radial-menu to spring forth. This menu is populated with all the interactions you can potentially have with that object - and those interactions are based on what you have equipped, what tools you have in your belt, and what creature you have under your command, among other things.

There will be objects the Survivor comes across that are not yet interactable and some whose interactions are limited due to a lack of tools or some other restriction. It's our goal to make interactable items become more rich as the Survivor crafts novel tools from components found while exploring, such that objects previously used for one purpose may be used once again. For example, Logtrees are primarily used to gather wood. As the Survivor progresses into higher materials a recipe for a Sap Tapper appears, which would allow for the gathering of Sap from Logtrees, a useful ingredient in its own right. Now the Survivor can return to his curated Logtree Farm and setup a second operation to harvest Sap.

The great thing about the interaction system in Crashlands is that it is expandable. Anything Seth or I dream of we can implement. This means that post-launch of the game we can easily expand on the content already available while simultaneously adding additional systems for the Survivor to muck around with.

That's all we want to share FOR NOW. Check back in on February 27th (that's 2 weeks from now), and we'll have some juicy morsels for you to suck on. The topic next time will be: CRAFTING.

Want to join up with other Crashlands fans? Head over to the community subreddit and GET TO IT!

Roid Rage is the first in a series of Butterscotch Minis.

by Bscotch
7.4 years ago

Announcing our next major title!

by Sam Coster
7.5 years ago