Crashlands is out and about, fluttering and flittering and sputtering in the breeze, and it has been one heck of a ride for the three of us. Against everyone else's better judgement, we decided to go through what we have been calling a "quad-launch" -- launching on four operating systems simultaneously -- and it... actually worked! Granted, we have barely slept in 3 days and have been hunched over our computers so hard we're all about to slip a disk, but HOT DANG! We did it.

Now that the insanity of the opening couple days of launch has died down, we've had some time to sit down and plan how to make this giant beast keep on kicking.

Just because the game is out, doesn't mean we're done working on it! We have a schedule laid out for making sure everyone in the universe has the best Crashlands experience possible. Here's the current plan.

Even though our intrepid beta testers put in over 4,000 hours of debugging, naturally, some bugs appeared after launch. Most of them are pretty minor, but a few could cause some people some serious headaches. So our first priority is taking care of all these whacky bugs to make sure we make Crashlands as enjoyable as possible for everyone. Version 1.0.5 will have these bug fixes, and it should be deployed & submitted by the middle of this week (January 27).

There are a number of other features that we've been looking into adding to just make life a little bit better and smooth some of the rough edges that still exist in the gameplay. We have some pretty cool ideas for these, but we'll have more details as we get closer to deploying this patch. No set date on when 1.0.10 will be deployed, but it shouldn't be too long after 1.0.5.

So far, the most difficult aspect of managing Crashlands' launch has been keeping up with all our players. We love you all and want to respond to everything, but we're getting pretty bogged down by the sheer number of places we have to look! Currently, we're getting messages and bug reports via Twitter, Steam forums, the Bscotch forums, the Crashlands subreddit, and email. It's amazing, but also pretty overwhelming! So Adam is cobbling together a new CONTACT tool, so you all can send us your love, hate, and bug reports in a much more reasonable, consolidated, and sane fashion (sane for us, anyways).

And last but not least, all three of us want to extend a huge THANK YOU to all the youtubers, streamers, reviewers, tweeters, those at Valve, Apple, and Google who chose to put Crashlands front-and-center on their stores, and of course, the players. All we can do is make the game and yell a bunch, but you all actually listened and helped us get to where we are.

So thank you all for everything. We hope we can keep slapping huge smiles across all your faces for YEARS TO COME!

Want to meet us at GDC?

Along with bajillions of developers, publishers, hobbyists, students, and SO ON.

by Bscotch
5.2 years ago 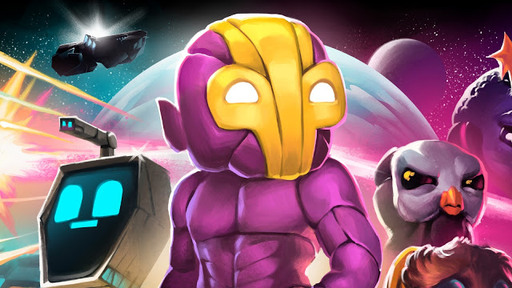 To prepare you for launch, we've created the Crashlands Beginner's Guide.